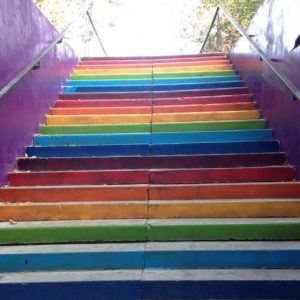 Investigative journalist Grigory Pasko has been attacked in the Siberian city of Barnaul, and told by the assailants to ‘get out of our city’, a day after he was accused of being a spy by a local blogger.  Reporter Denis Korotkov, who filmed himself taking part in vote-rigging to demonstrate that the recent Duma elections were fraudulent, has himself been charged with electoral fraud.  A medical clinic in Tomsk that repainted a stairwell in rainbow colours has fallen foul of local right-wing activists who have taxed it as ‘gay propaganda‘, noting, ‘rainbows appear in the sky as God wills it’.  Russian Orthodox Patriarch Krill has signed a petition calling for a complete legal ban on abortion.  Serial Kremlin offender Roslovtsev has been detained in Moscow’s Red Square whilst carrying a poster saying ‘I Am Not Afraid of 212.1!’ (the article of the Criminal Code which penalises public protests).  A new report by Dozhd TV has apparently revealed the connections between Pyotr Kolbin, the former co-owner of the the Gunvor energy company (from which Vladimir Putin is believed to channel his wealth) and the President.

The findings of an international criminal investigation to be released today into the shooting down of flight MH17 are likely to show that the plane was brought down by a Buk missile fired from separatist-controlled territory in eastern Ukraine, say sources close to the matter.  Responsibility for the incident, which killed 298 civilians, remains a source of contention for Russia and the West.  Although condemned by the West as such, Amnesty International says it is hard to label Russian attacks in Syria war crimes.  Following the alleged resignation of chief Alexander Bastrykin, the Kremlin refused to confirm rumours that the Investigative Committee itself may be abolished.  Despite the prospects of an oil glut, the Russian Pacific island of Sakhalin is expected to increase oil production by 8% in 2016 from a year ago.  President Putin has lauded farmers for ensuring that this year’s grain harvest has been the highest in post-Soviet times.  The bumper harvest is not such good news for bread, however.

Environmentalists are opposing a new bill which would extend the spring hunting season.  Fears for the future of Siberian forests are growing as the government continues to underestimate the gravity of wildfires.  Moscow has had enough of Microsoft.