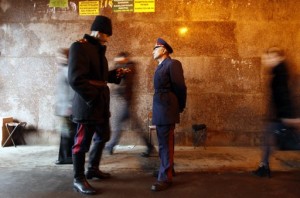 Alexander Perepilichnyy, the U.K.-based Russian businessman (and ‘supergrass’) who had provided evidence in the tax fraud case uncovered by Sergei Magnitsky, has died, aged just 44 and ‘in seemingly good health’.  The Independent says that Perepilichnyy was a key witness in the Magnitsky fraud case, and ‘the fourth person to be linked to the scandal who has died suddenly.’  Imprisoned Defense Ministry head Dmitry Mityaev fears he will meet the same fate as Magnitsky, whose corruption case he allegedly helped to build.  Meanwhile Yevgenia Vasilyeva, a suspect in the fraud case tied to Anatoly Serdyukov (and reportedly, Serdyukov’s lover) is asking to be released from pretrial house arrest.  Yulia Latynina wonders why Konstantin Malofeyev was able to become ‘a powerful player in the communications sector’ since his fraudulent business transactions in 2007.  A criminal case has been opened as a result of complaints by inmates at the Kopeisk prison where a strike was held over the weekend.  Russian billionaires like Vladimir Antonov flee to London due to ‘Britain’s friendly regime of offshore secrecy’, says the Guardian.

During Prime Minister Dmitry Medvedev’s visit to France, an agreement was signed to develop economic cooperation and stimulate investment with Russia through a Business Cooperation Council.  Medvedev said that Russia had no plans to switch its euro reserves into other currencies.  The Foreign Ministry is threatening the European Union with retaliatory measures if visa-free travel is not implemented in time for the Sochi Olympics in February 2014.  The Transportation Ministry’s plans to subsidise regional airlines with $24 million a year for the next four years will lead to savings of up to 50% on domestic routes.  Bloomberg has compiled a special report on MegaFon’s main investors, Alisher Usmanov and Mikhail Fridman, to mark its IPO, which begins today and is expected to fetch up to $1.7 billion.

The release of the Dagestani mixed-martial-arts fighter Rasul “Black Tiger” Mirzayev, convicted of manslaughter, has caused an uproar among supporters of his victim’s family, and could fuel ethnic tensions.  Reuters reports on the Putin-led resurgence of the Tsarist warrior caste, the cossacks.  The cossacks’ 21-st century mission is part of the Kremlin’s ‘new drive to promote conservative values’, says the Washington Post.  The exodus of young professionals from Russia is sparking fears of a brain drain.