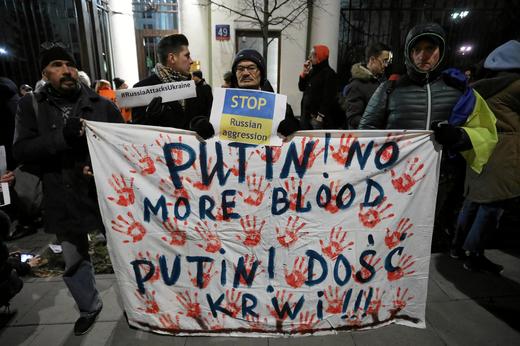 Russia has begun prosecuting the crew of the Ukrainian naval vessels that it seized in the Kerch Strait on Sunday, releasing videos of them confessing to intruding into Russian waters. One has already been given a two month detention. Ukrainian President Petro Poroshenko warned viewers on national television that “Ukraine is under threat of full-scale war with Russia,” alleging an increase in Russian military presence along the border. Russia’s Defence Ministry confirmed that it will soon deploy new surface-to-air missile systems on Crimea. The German Foreign Minister says Moscow must return to following international law. Whether or not Russia was provoked, “Russia had no legal justification for firing on three Ukrainian boats and seizing them”, says the New York Times. What does Poroshenko’s declaration of martial law actually mean? Kremlin spokesman Dmitry Peskov says it will increase existing tensions in eastern Ukraine. Ukraine’s Oschadbank was awarded $1.3 billion in compensation for loss of business and assets in Crimea following Russia’s annexation of the peninsula in 2014. Russia says it will not accept the ruling, given that it was made by an international arbitration court which, it says, “does not have jurisdiction”.

Research from Pricewaterhouse Coopers indicates that 20% of Russian corporate CEOs believe that sanctions against Russia have helped their business. State bank VTB accidentally reported a loan of $12 billion to the Central African Republic, apparently due to a clerical error. Former Yukos head Mikhail Khodorkovsky says that Russians working for the CAR played a “serious” role in the deaths of three journalists there earlier this year. In the same interview, he suggests that all Russians should be given weapons in order “to defend themselves from their own government”. A lawyer for gun-rights activist and alleged spy Maria Butina says she is suffering psychologically from being held in solitary confinement. Vyacheslav Maltsev, the leader of an outlawed Russian nationalist opposition movement, has been granted political asylum in France.

The European Court of Human Rights ruled that Russia’s ban on LGBT rallies is a violation of human rights. Around three quarters of the 160,000 new diagnoses of HIV in Europe were in Ukraine and Russia. A health clinic in Moscow was offering female genital mutilation procedures for young children (“responding to demand”), until its website was exposed by Meduza earlier this month.