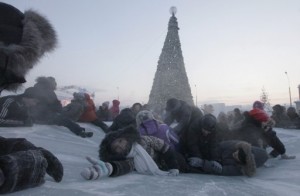 News that President Vladimir Putin will sign into law a bill banning U.S. citizens from adopting Russian orphans will cause ‘anguish’ among U.S. families already in the process of seeking adoption and marks a year of ‘increasing hostility toward the United States’.  Russia is the second-most popular country for U.S. adoptions (after China) – 970 Russian children were adopted by U.S. families in 2011.  The Duma is apparently proposing to forbid foreign nationals from working at Russian television channels, prompting the director general of Public Television to call the move ‘strange and absurd’.  RFE/RL reports on the Duma’s Christmas festivities.  Foreign Minister Sergei Lavrov says that time is running out on Syria, and told a Syrian diplomat that the conflict must be resolved by dialogue rather than force.  Russian and U.S. officials are expected to meet next month to discuss proposals for ending the conflict.  A decision in the Sergei Magnitsky trial is expected today. ‘If [Dmitry] Kratov is indeed acquitted, it would appear that no one is guilty in Magnitsky’s death.’

It was rumoured that Anatoly Serdyukov had fled the country last night in the wake of fraud allegations, but the former Defense Minister has since appeared for questioning in the $100 million property fraud case, in which he is not yet a suspect.  According to Deputy Finance Minister Sergei Storchak, Bank Rossii first deputy chief Alexei Ulyukayev may be the candidate to replace Sergei Ignatiev as chairman of the central bank next year.  The President and Prime Minister are to begin traveling by helicopter next year, part of a bid to end the traffic nightmares caused by their motorcades.

Pro-Kremlin youth group Nashi plans to hold its Seliger summer camp in both Europe and the U.S. next year, in a bid ‘to rally fellow countrymen living abroad’.

PHOTO: Children have fun on a piece of ice formed as a giant bowl, with the air temperature at about minus 25 degrees Celsius (minus 13 degrees Fahrenheit), in Russia’s Siberian city of Krasnoyarsk, December 28, 2012. (Ilya Naymushin / REUTERS)