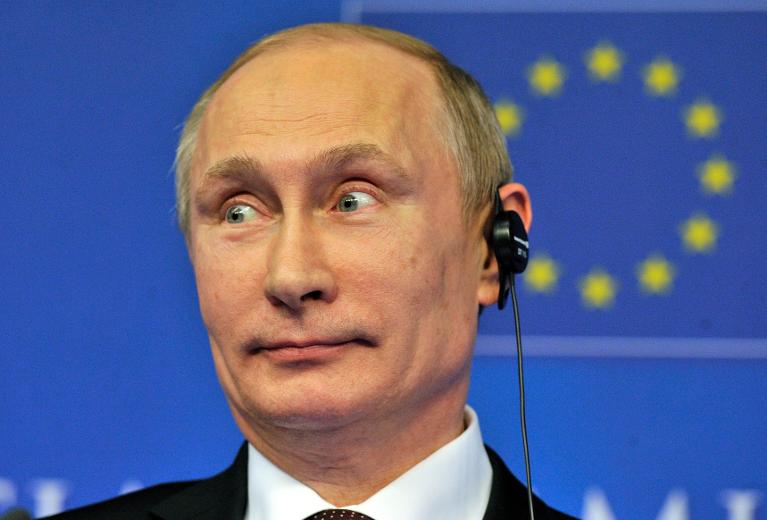 Russia and the E.U. met for a summit in Brussels yesterday to trade barbs over Ukraine; President Vladimir Putin advised European officials not to interfere in the current conflicts, reinforcing one of the key cornerstones of his foreign policy.  ‘The more intermediaries there are, the more problems there are.’  He said that Russia would stand by its original commitment to lend $15 billion to Ukraine and to reduce prices for natural gas even in the event that oppositionists come into power.  ‘It is not important for us who’s in power,’ he said, and suggested that the main criteria for relations was the likelihood of Russia eventually getting its money back.  But First Deputy Prime Minister Igor Shuvalov was less generous, suggesting that Russia would revise the current agreements should ‘another agenda’ arise.  The New York Times noted that the customary courtesy of a welcoming dinner, usually extended to Putin on his Brussels visits, was canceled for this trip, taking this as a more subtle sign of tensions.  Bank of Moscow (owned by VTB) has agreed to pay a $9.5 million fine to U.S. regulators for violating financial sanctions against Iran.

The Committee to Protect Journalists, based in New York, says journalists in Russia and abroad have faced unprecedented restrictions in their efforts to cover sensitive Sochi-related stories, including migrant worker abuse and environmental scandals, and that local journalists have been the target of a smear campaign.  Billionaire and Green Alliance politician Gleb Fetisov is selling his substantial business assets in order to focus his energies on opposition politics.  Investigative Committee chairman Alexander Bastrykin wants Moscow judge Irina Baranova prosecuted for corruption charges.

Émigré businessman Sergei Polonsky says he will never return to his home country, for fear of imprisonment and possible death.  Certain kinds of fresh vegetables are a distant memory in Samara, says a resident.