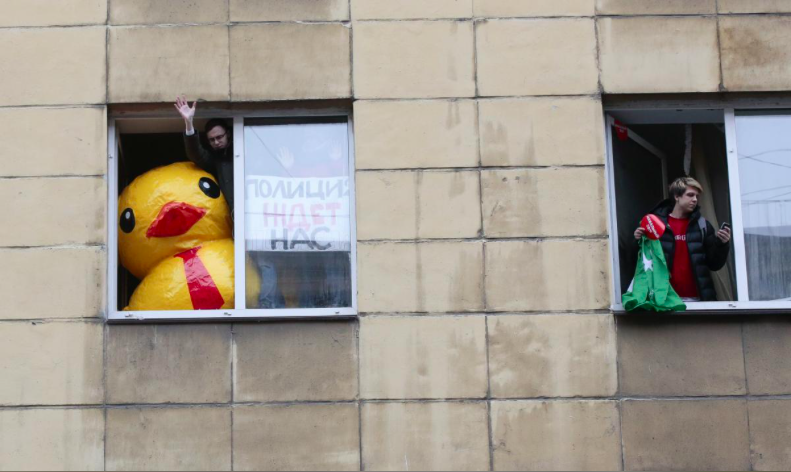 By Kremlin estimates, 5,000 people gathered in freezing temperatures across Russia this weekend, in over 100 cities, in support of opposition leader Alexei Navalny’s calls to protest the upcoming re-election of Vladimir Putin. A reported 257 were detained, with many fearful that protesting could lead to personal repercussions; Navalny himself was detained on arrival at the Moscow demo, along with 15 others, after Moscow authorities refused to give permission for the rally. His offices in Moscow were also raided by police earlier that day, possibly in a failed attempt to shut down his YouTube channel, as they did during protests last March. ”It’s absolutely clear that the most important thing that any person can do now is to go and protest,” Navalny said. Yevgeny Roizman, the mayor of Yekaterinburg, told a crowd of protesters, “What we are being offered right now are not elections, and we must not participate in them.” The protests were largely ignored by state media; the Washington Post has a good overview of numbers.

Vladimir Putin’s opponents are reportedly colluding with the US Treasury to help them compile a list of Kremlin-connected oligarchs who could be sanctioned. Poland and the US are both strongly against a gas pipeline that would link Russia with Germany, saying it would politicise energy and promote European dependence on Moscow. The re-election of Finnish President Sauli Niinisto is being attributed to his skillful managing of relations with Russia. Bloomberg reports on “a widespread culture of prosecutorial excess” in which business owners are being detained and losing assets, arguing that the lawless prosecution of business professionals is more widespread than cases of political persecution. A Moscow movie theatre was raided by police for screening The Death of Stalin, and the Culture Ministry may start fining cinemas who show it.

An oil price of $71 per barrel means Russia Inc is back in profit. The International Olympic Committee has completed its list of the 169 Russian athletes who will be allowed to compete next month, with dozens of leading athletes omitted. A legal loophole led to a same-sex marriage being recognised in Russia, although the authorities quickly retracted it.

PHOTO: Supporters of Russian opposition leader Alexei Navalny look out from windows of a building during a rally for a boycott of a March 18 presidential election in St. Petersburg, Russia January 28, 2018. The placard reads “Police is waiting for us”. REUTERS/Anton Vaganov