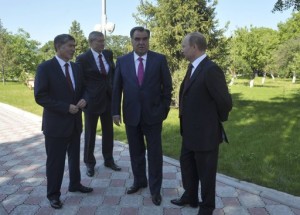 Top economist and government advisor Sergei Guriev has stepped down from his post and possibly fled Russia completely, reportedly to avoid political pressure and an investigation into his role in exposing the prosecution of Mikhail Khodorkovsky as unjust.  Guriev also apparently declined an invitation to run for a seat on the board of directors at Sberbank.  Jailed Pussy Riot member Maria Alyokhina has been hospitalised seven days into her hunger strike, held in protest against what she is calling her political persecution, and sparked initially by not being allowed to attend her own parole hearing in person.  The director of the Federal Drug Control Service, Viktor Ivanov, saw a 23-fold salary increase last year, and his wife’s income apparently increased by over 100 times.  A Kremlin-linked private equity firm reportedly bought a 48% stake in VKontakte ‘the day after VKontakte’s offices were searched’.  Prime Minister Dmitry Medvedev has given a vague indication that the Kremlin might eventually start to think about renewable energy.

Russia says it will supply the Syrian government with ‘stabilising’ anti-aircraft missiles that will boost President Bashar al-Assad’s defense capabilities and, it says, ‘restrain some “hotheads” considering a scenario’; Israel says it will bomb them if deployed.  The European Union, meanwhile, has withdrawn its arms embargo on Syrian rebels, drawing criticism from Russia who says it is ‘throwing fuel on the fire’.  Political heads at an informal meeting of the Russia-led Collective Security Treaty Organisation have pledged to work together to maintain security in Afghanistan.  The Duma is working on draft legislation to prevent the adoption of Russian children by same-sex couples abroad, sparked by France’s legal recognition of gay marriage.  The head of the Investigative Committee has alleged that a powerful pro-pedophilia lobby in the government explains light sentences for perpetrators of child abuse.

The head of Sberbank, German Gref, says Russia’s main infrastructure hurdle is its lack of project management experience.  Billionaire Andrei Guryev has been removed from his government post due to a conflict of interests with his post on the board of fertiliser maker PhosAgro.  Lukoil is investing $4 billion into southern Iraq’s West Qurna-2 oilfield.  In a challenge to the dominance of Gazprom, Rosneft is taking over the remaining shares of Itera, a local gas firm in which it already owns 51%, for $3 billion.