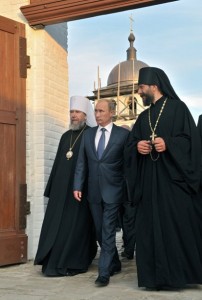 A new report by Boris Nemtsov of the opposition group Solidarity (in Russian here) indicates that President Vladimir Putin’s grip on power is largely inspired by his taste for luxury, alleging the use of 20 residencies, 50 planes and helicopters, and 700 cars.  (RFE/RL has images of some of his ‘bling’.) ‘In a country where more than 20 million people can hardly make ends meet, the luxurious life of the president is a blatant and cynical challenge to society by a limitless ruler […] We think the lifestyle of those in power must become a subject of public discussion.’  Putin’s drive to increase the state’s interaction with the Orthodox Church is the product of a long history of ‘co-dependence’, says Ilana Ozernoy.

Taisya Osipova’s eight-year sentence for drugs-related charges is double the length of that requested by prosecutors, contributing to suspicion that the case is politically motivated.  Eduard Limonov called it ‘terrifying revenge’ for Osipova’s refusal to testify against her husband, senior Other Russia figure Sergei Fomchenkov.  Meanwhile the presidential human rights council has published a statement criticising the treatment and sentencing of Pussy Riot members.  The two younger women have not seen their children in months, notes RFE/RL, as the free remaining members promise to continue their activities.  A group of pro-Orthodox activists – with a television camera crew – stormed a Pussy Riot theatre event yesterday and harangued the guests.

General Motors Co plans to invest $1 billion over the next five years to expand car and component production in Russia, as Volkswagen announced that it, too, would invest €1 billion in the same market to 2018.