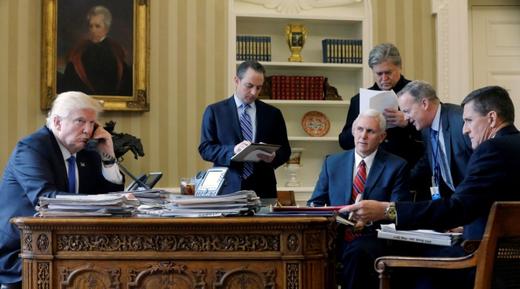 President Vladimir Putin and U.S. President Donald Trump have held their first phone conversation since the latter’s inauguration, leading a deputy defence minister to say he sees Trump as having ‘strong intentions to cooperate with Russia’.  The director of a Moscow think tank said the pair discussed ‘almost the whole list of major issues in their conversation most remarkably, in a positive tonality’.  The head of RDIF, Russia’s direct investment fund, says the conversation sends a positive signal to investors.  Al Jazeera says Russia is happy with Trump not because of intelligence links, but because the elites are anticipating that his presidency will lead to a de-escalation of internal and external tensions through improved relations.  Murmurs that Trump will unilaterally lift anti-Russia sanctions have been met with ‘swift and fierce’ denunciations in the U.S. Senate, and were not actually raised during the Putin-Trump call, notes RFE/RL, which analysed other key issues that were not touched upon.  The Prosecutor General’s Office has no interest in making any changes to the law against ‘foreign agents’.  Moscow officials are threatening to prosecute anyone who demonstrates in support of political prisoner Ildar Dadin.

The FT tries to anticipate how Russia might meddle in the upcoming German elections, in which Angela Merkel stands ‘as a liberal beacon in a world of rising nationalism’.  Former Soviet leader Mikhail Gorbachev says it looks as though ‘the world is preparing for war’.  Forbes bets on the Lefortovo Four confessing to being American spies, if they end up standing trial in Moscow (‘just as Stalin’s political enemies confessed to being Nazi spies’), and analyses Putin’s claim that the CIA hacked the Kremlin, along the lines of his oft-used strategy to ‘accuse your enemies—falsely—of doing to you what you are doing to them‘.  Ukrainian nationalists say they will block indefinitely a railway line into eastern Ukraine in protest against legal and illegal trade with Russian-backed separatists; the blockade has already held up 12 freight trains.  Fighting between Ukrainian soldiers and pro-Russian rebels continues in eastern Ukraine.  Russia’s negotiations in Syria were deft enough to have left it entirely in charge of Syria’s future.

The United Arab Emirates is to begin offering Russian visitors visas on arrival in the country in a bid to increase tourism.  Soviet children’s books!