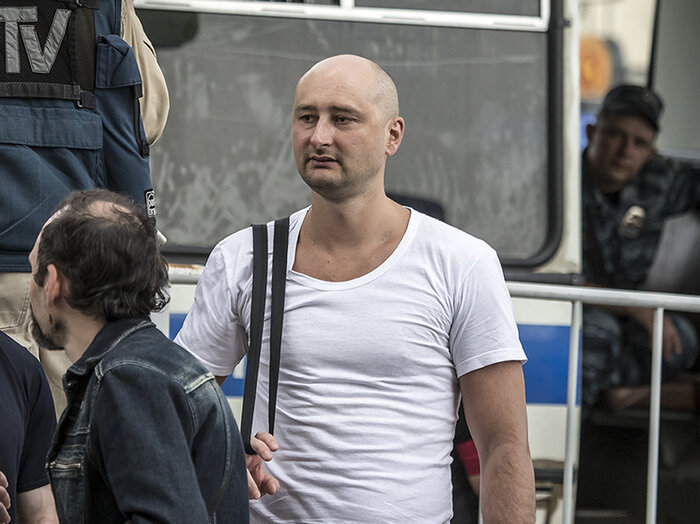 Russian journalist and vocal Putin critic, Arkady Babchenko, has been shot to death in his Kiev apartment; he had fled Russia early last year out of fear for his safety. Police were quick to cite links to Babchenko’s work, which included memoirs of the Chechen campaign and vocal criticism of the Kremlin. Babchenko had been the target of a deportation campaign by powerful state network Channel One, precipitating his emigration to Ukraine. TASS is reporting that Babchenko’s “civic stance” is being considered as a motive. The Ukrainian PM said, “I am convinced that the Russian totalitarian machine could not forgive his honesty and principled position.” Russia’s Investigative Committee has launched its own murder investigation into Babchenko’s death. The US Treasury has indicated that it wants oligarch Oleg Deripaska to keep his stake in En+ Group in the range of 40% in order for it to escape sanctions. State development bank VEB is going to need a cash injection at some point in the future, despite being the main vehicle designated with the task of implementing President Vladimir Putin’s ambitious new economic goals.

The UN is investigating attacks on hospitals in Syria that were carried out apparently after Russia learned of their locations. Vladimir Putin spoke with his Turkish counterpart yesterday regarding Syria and their economic relations. Foreign Minister Sergei Lavrov said it was inappropriate for Australia and the Netherlands to issue Moscow with ultimatums regarding compensation for the relatives of those killed in the MH17 plane crash in 2014. Russia’s UN envoy says the country will not accept the crash investigation’s “baseless conclusions”. The Kremlin offered a classic comment on the news that billionaire Roman Abramovich has taken Israeli citizenship. “The Kremlin doesn’t think anything about this,” said spokesman Dmitry Peskov. The New York Times, conversely, is thinking about it.

Following a warning from the US, Latvia is reportedly investigating whether its banks acted as conduits for Russian funds used for political interference. Lukoil reported a 75% increase on its first quarter net profits thanks to the surge in crude prices earlier this year. Russia’s Olympic Committee has elected a new president. A diversion: bizarre World Cup souvenirs.

PHOTO: Police say Russian journalist Arkady Babchenko was fatally shot at his apartment in Kiev, Ukraine, on Tuesday. He is seen here in 2013. (Alexander Baroshin/AP)