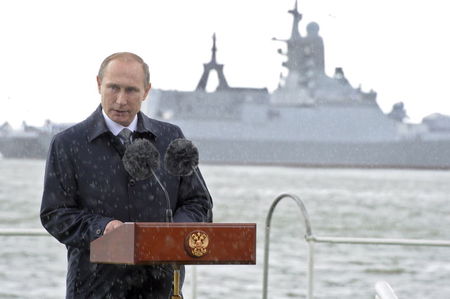 As expected, Russia vetoed a United Nations Security Council draft resolution to set up an international tribunal to prosecute those suspected of downing the MH17 aircraft.  The Australian foreign minister called Russia’s use of its veto ‘an affront to the memory of the 298 victims of MH17 and their families and friends’. (Russia was the only member country not to approve or abstain.) President Vladimir Putin spoke out personally against the proposed tribunal, with a Kremlin statement indicating that he finds it ‘inexpedient to create such a judicial body’.  The Kremlin also defended its move to bar the National Endowment for Democracy under the ‘undesirable organisations’ law, arguing that it does not harm citizens’ rights or freedoms.  Authorities in Novosibirsk have detained three members of the opposition party Parnas, including its local leader Leonid Volkov, after they went on hunger strike to protest the state’s refusal to register them as candidates in the upcoming local elections.  The BBC says the detentions and subsequent fines were levied ‘for staging a protest’.  Elena Klimova, who founded an online community for LGBT Russian teenagers, has been fined 50,000 roubles for distributing ‘propaganda of non-traditional sexual relations among minors’.

Russians anticipating holidays in Europe are struggling to follow through with their plans due to the rouble’s depreciation.  The Central Bank is $300 million behind goals to raise its international reserves, and is halting foreign currency purchases in a bid to boost them.  Russia just loaned Belarus $760 million.  ‘Gazprom spends twice as much money to build domestic pipelines than when it partners with foreign companies outside Russia [… it] loses almost as much money due to corruption and inefficiency as it makes in profits,’ argues Reuters, in a piece suggesting that Russia’s fate is inextricably tied to the company.

Polls indicate that the public’s negative view of the United States is improving.  The Moscow Times reports on the decline of Moscow’s bookshops and Muscovites’ waning love of literature.  Ukraine has captured and will charge a Russian army major with terrorism.