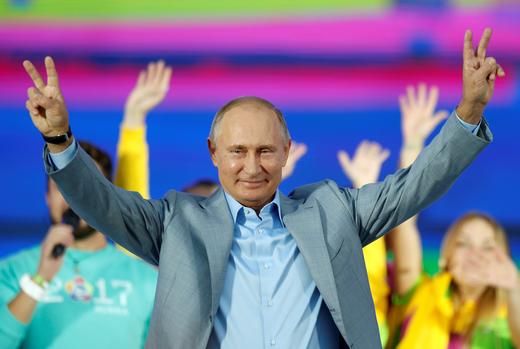 TODAY: Ekho Moskvy producer flees Russia after attack; Navalny’s presidential campaign head detained in Moscow; Putin and Kirill to honour victims of political repression; hundreds gather for anniversary of Great Terror; Rosneft as political tool; Kaspersky Lab will suffer from recent allegations, but not much; first charges made in US elections meddling.

Aleksei Venediktov, the editor in chief of Ekho Moskvy, revealed that he has evacuated Ksenia Larina, one of his top producers, from the country due to concerns about her safety. He blamed the decision on state-run television’s response to last week’s attack on Larina’s colleague, Tatyana Felgengaur, who was stabbed in the neck whilst at work. “[T]he next blow to the neck from a knife could be because of Solovyov’s programs, and he will be the instigator,” Veneditkov said. The head of Alexei Navalny’s presidential campaign headquarters in Moscow was detained, together with two colleagues, on suspicion of organising a rally. Moscow is to unveil “The Wall of Sorrow”, a memorial dedicated to the memory of victims of political repression, in the city center today with a ceremony attended by Vladimir Putin and Patriarch Kirill. Hundreds gathered near the former KGB headquarters yesterday to mark the memory of some 30,000 Muscovites that were murdered in Josef Stalin’s Great Terror.

The New York Times writes on oil as a geopolitical tool for Russia, focusing specifically on Rosneft’s recent action in Venezuela, the eastern Mediterranean and Africa, which are a response to the Western sanctions that have prevented major oil giants in the US from working with Rosneft. Eugene Kaspersky said that recent allegations against Kaspersky Lab will affect US sales this year, but minimally (by less than 10%), and will have little impact on global revenue. The Federal Antimonopoly Service will issue a directive determining the conditions of conduct for the Uber – Yandex.Taxi merger. The Mi-8 Russian helicopter that went missing in the Arctic has been found with all eight passengers dead.

The first charges have been made in the investigation into Russia’s interference in last year’s US presidential elections. More details of the Kremlin’s online propaganda “troll farm” have emerged; one of its former employees describes it as “Dadaism […] We were engaged in the ugliest things that only 20-year-old very cheerful lads — who perfectly understand what amusing place they found themselves in — could do.”

PHOTO: Russian President Vladimir Putin waves to participants of the 19th World Festival of Youth and Students during the closing ceremony in Sochi, October 23, 2017.