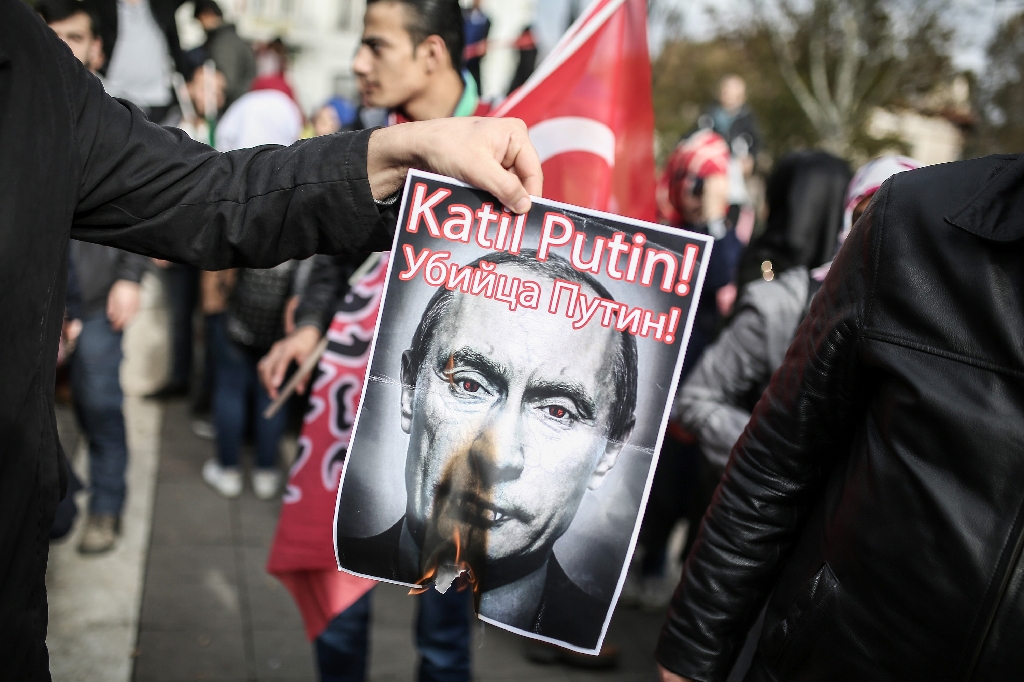 As promised last week, President Vladimir Putin signed a degree outlining a package of economic sanctions against Turkey following last week’s shooting down of a Russian jet on the Turkish border with Syria.  The sanctions include restricted imports, a ban on charter flights, an end to tour operator trips to Turkey, a ban on Russian sports clubs signing Turkish players, and the suspension of visa-free travel for Turkish citizens as of January 1st next year.  ‘The rapidly dwindling options for Russians for an affordable beach holiday have prompted some to worry that Moscow is deliberately fostering a more isolationist national mood at a time of economic hardship and military adventurism,’ comments the FT, as the closure of both Egypt and Turkey leads many more Russians to take domestic holidays.  Kremlin spokesman Dmitry Peskov says Putin is ‘fully mobilised to the extent that the circumstances demand’, and spoke of the ‘unprecedented […] gauntlet thrown down to Russia’.  Former Finance Minister Alexei Kudrin has warned Russia to act with caution regarding sanctions against Turkey, due to the high volume of industry dependence on trade and supply from Turkey.  Contrary to earlier claims by Putin, Russia did not inform the US military of the jet’s flight plan before it was shot down by Turkey, according to US officials.  The New York Times compares Vladimir Putin and Turkish President Recep Tayyip Erdogan, described by one analyst as ‘both highly status conscious and both high-risk players’.

The Interior Ministry position on security is that it is justifiable to ‘tighten the screws’ and restrict civil rights in the instance of a serious security threat.  Russian Wikipedia indefinitely suspended one of its editors who organised a meeting with media watchdog Roskomnadzor, consumer rights watchdog Rospotrebnadzor, and the Federal Drug Control Service, to cooperate on ‘socially sensitive’ entries.  For the next parliamentary election in September 2016, Western election observers may have to report their findings to Russia’s Central Election Commission, after OSCE documents were deemed ‘too politicised’.

Hundreds of truck drivers are heading to Moscow to demand the cancellation of a new road tax that will increase costs by 15-20%.  RFE/RL discusses the main ways in which climate change is affecting Russia.  The athletics doping whistleblowers have no regrets.

PHOTO: A protester sets fire to a poster depicting Russian President Vladimir Putin and reading “Putin, killer!” during a demonstration against Russia on November 27, 2015, in Istanbul (AFP Photo/Cagdas Erdogan)