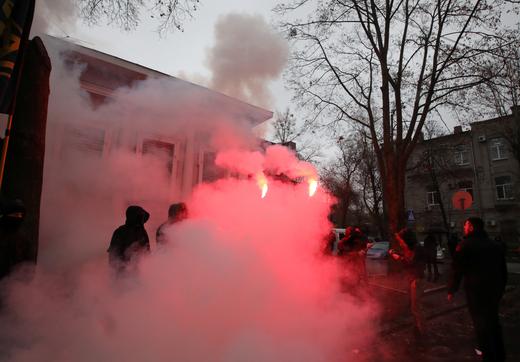 Russia has now deployed its fourth battalion in Crimea, of S-400 missile systems. US President Donald Trump canceled his planned meeting with President Vladimir Putin, scheduled for this weekend on the sidelines of the G20 summit, ostensibly because Russia is still holding the vessels and sailors it seized on Sunday during the Kerch Strait incident. German Chancellor Angela Merkel said she would address the issue with Putin at the G20, and defended sanctions as a way to uphold the principles of international law. Ukrainian President Petro Poroshenko is warning that Putin wants to annex his entire country, calling on NATO to deploy warships in the Black Sea. “Putin wants the old Russian empire back. Crimea, Donbass, the whole country,” he said. Russian citizens are being denied entry at Ukraine’s borders as part of Poroshenko’s plan to restrict their rights. Kremlin spokesman Dmitry Peskov denies any knowledge of Russia restricting shipping routes in the Sea of Above near Crimea, despite insistence from Ukraine’s infrastructure minister that, in fact, it is.

The Economist writes on Russia’s booming agriculture sector, which has experienced a production breakthrough in the past five years, in an otherwise stagnating economy. The Energy Ministry accepts the need to reduce its oil output, but is pushing for a gradual process and remains in negotiations with Saudi Arabia. Police in Yekaterinburg seized children’s drawings from a school following a contest to raise awareness and tolerance for same-sex couples. The drawings will be studied for signs of “gay propaganda”.

Billionaire Oleg Deripaska is in London’s High Court this week as part of a dispute he brought against opposition ally Vladimir Chernukhin over a property dispute.

PHOTO: Demonstrators burn flares during a rally to support the Ukrainian navy after Russia seized two Ukrainian armored artillery vessels and a tug boat in the Kerch Strait, in front of the Russia Consulate in Kharkiv, Ukraine November 26, 2018. REUTERS/Stanislav Belousov