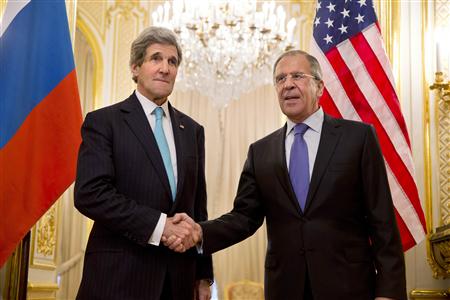 Foreign Minister Sergei Lavrov met with U.S. Secretary of State John Kerry over the weekend to discuss the Crimea crisis, with the talks ending in deadlock, although Russia vowed that it will not send troops further into Ukraine.  (Video of Lavrov’s closing statements can be viewed here.) Lavrov says that Ukraine cannot function as a ‘unified state’ and should instead become a federation, with ethnic Russian regions granted autonomous powers; Kerry says that the 40,000-strong Russian troop build-up along the Ukrainian border is complicating matters and should be pulled back, and made it clear that the U.S. still considers Russia’s actions in Crimea to be illegal.  Lavrov says current sanctions are causing ‘no painful sensations’ for Russia.  President Vladimir Putin applauded Russia’s takeover of Crimea, saying that it demonstrates Russia’s military professionalism, and congratulated the military for preventing bloodshed.  The Moscow Times says the Crimea annexation amounts to an abandonment of the last 20 years of Russia’s foreign policy, and that it is unclear what Moscow hopes to gain.  A former advisor of Vladimir Putin says the President will not stop until he has taken control of Belarus, the Baltic states, and Finland.  Masha Gessen says Crimea is all about Russia’s plan to ‘remak[e] itself as the leader of the anti-Western world’.  Crimea’s Tatars, for their part, condemn the annexation, and are appealing to Western leaders for recognition as an autonomous group.

The FSB says it has noticed an increase in ‘foreign threats to the state’ since the annexation of Crimea.  The Independent considers the effects of current Western sanctions on an estimated £27 billion worth of Russian investments in London.  Evgeny Lebedev, who runs London’s Evening Standard newspaper, says any increased sanctions against Russian oligarchs would affect London’s economy.  Russia is taking steps to terminate its bilateral agreements with Ukraine over the Black Sea Fleet, and wants international watchdogs to investigate Ukraine’s new authorities for human rights violations against ethnic minorities.

Renovations are already underway in Sochi to prepare for its upcoming Formula One event, but the government is brainstorming on ways of turning Sochi into a world-class resort.  Lukoil has officially opened the giant West Qurna-2 oil field in Iraq.  Former Yukos head Mikhail Khodorkovsky has been granted a one-year resident’s permit in Switzerland.  Fedor Burlatsky, a key political reformer during Mikhail Gorbachev’s rule, has died aged 87.