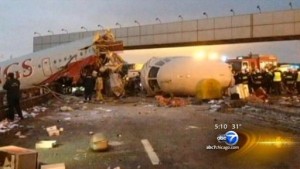 As predicted, Vladimir Putin gave his signed approval to a bill banning U.S. citizens from adopting Russian children.  The Church quickly voiced its support for the bill, earning criticism for acting like a ‘government ministry’.  The West broadly sees the ban as ‘cruel’ and ‘spiteful’.  Nonetheless, the ban is ‘remarkably popular’ in Russia, with 56% supporting the ban. Actual cases of cruelty to children by U.S. adopters has been rare, but many remember the case of Dima Yakovlev.  Putin is using the ban to harness Russian nationalism, says the Washington Post.  The only remaining suspect in the case of Sergei Magnitsky’s death, senior prison doctor Dmitry Kratov, has been acquitted of negligence.  A spokesman for Hermitage Capital, his former employer, said that Kratov’s acquittal ‘goes against any logic or concept of justice’.  A Red Wing Airlines passenger jet crash landed at Moscow’s Vnukovo airport on Saturday, sliding off its runway and into a main road. (The Guardian has video.) Investigators suspect that faulty brakes may have been to blame.  The plane was traveling without passengers, but five of the crew members have been pronounced dead.

The leader of Syria’s opposition has rejected an invitation to visit Russia for peace talks.  Following a meeting between Foreign Ministry Sergei Lavrov and international mediator Lakhdar Brahimi, expectations of a negotiated solution to the Syrian crisis are low.  Former defence minister Anatoly Serdyukov has apparently remained silent after being summoned for questioning in a corruption investigation, blaming a sick lawyer.  The WSJ investigates the Kremlin’s attack on Moscow-based, U.S.-financed station Radio Liberty.  Activists campaigning to have the Central Electoral Commission disbanded have gathered over 13,000 signatures for their Supreme Court petition.

Here’s a run-down of Moscow’s New Year’s celebrations.  Over 128,000 policemen are to provide security for the over 22,000 New Year’s festivities being held across the country this year.