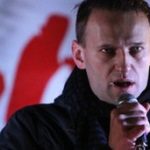 A week ago, Yulia Latynina described Alexei Navalny, who coined the term ‘the party of crooks and thieves’ as ‘the only electable Russian’.   She called the tireless anti-corruption blogger the ‘single public figure who has a good chance of winning support from either a radical uprising or a moderate revolution.‘  His arrest at the anti-Putin protests which swept across Moscow yesterday, may therefore, as Julia Ioffe notes in the New Yorker, prove another misstep for the Kremlin:

The problem for Putin’s government is that, unlike the other two hundred and ninety-nine or so people arrested, Navalny is as close to a real celebrity as the Russian opposition has. He is also the one coherent, galvanizing, and viable figure among them. Despite his flirtations with nationalists, he is a brilliant political tactician and ad man: within three months of his coining the meme “party of crooks and thieves” to describe the ruling United Russia, one third of Russians polled said they identified United Russia as crooks and, yes, thieves.

No one among the opposition has been able to pull off the kinds of carefully calibrated victories Navalny can, and he has never been shy about his desire for power, which is why the Kremlin has been warily dismissive of him. Last week, when I asked Dmitry Peskov, Vladimir Putin’s press secretary, about Navalny as a possible pretender to the presidential throne, Peskov took the standard, vaguely neo-Soviet line: invoking spies and illicit cash. “I have a strong suspicion that he is earning money,” Peskov said. “It’s not about politics, it’s about money. I know for sure that a group of very talented lawyers are working behind him”—last winter, Navalny took up a collection to hire young lawyers to help him challenge corrupt state companies in court—“and supplying him with information and instruction. I know for sure that these specialists are working not only in this country but in some other countries, also. So, he has nothing to do with politics. It’s business. It’s like advertising on the Internet: another way of doing business.”