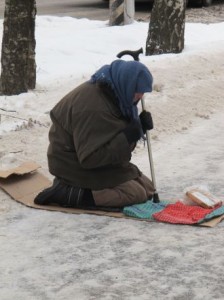 ‘Even in Soviet times, in Stalin’s times, the courts were more honest than this one’: the words of Pussy Riot lawyer Nikolai Polozov, after the defence was denied a request to call 13 witnesses, among them opposition leader Alexei Navalny.  The Moscow Times reports on how the famously pro-Kremlin Seliger youth camp has attempted to re-brand itself.  Putin critic and tycoon Alexander Lebedev, who says his ‘business has been deliberately and continuously destroyed by Division K of the Federal Security Service’s economic security department’ has told the press he is mulling a sale of his business assets in Russia.

New statistics have found that the number of officially impoverished Russians increased during Putin’s presidential re-election campaign in the last months of 2011 and early 2012.  A new FOM poll concludes that more than one third of Russians believe that the country is heading in the wrong direction.  The IMF has noted that in order for it to maintain pensions spending, Russia will have no choice but to increase the retirement age for men and women.  The Fund has also indicated that Russia is likely to suffer side effects from the current global economic difficulties.

Russia has reached an agreement with Syria on sending fuel to the conflict-torn country and Damascus has apparently requested a loan from the Kremlin to attenuate the effect of Western sanctions.

Nationalists, Cossacks and Orthodox groups have joined together in a long-mulled initiative to have Lenin’s mausoleum removed from Red Square.

PHOTO: According to the latest available data, 19.1 million people are currently living below the poverty line. (Andrei Romanenko / Wikimedia Commons)