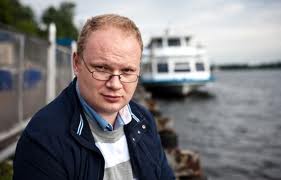 A few days ago, Jonathan Earle in the Moscow Times wrote about the difficulties currently faced by opposition journalists. Earle discussed how the new momentum of the protest movement has ushered certain reporters into organizational duties which could be seen by some as incompatible with the execution of their tasks as reporters, as the divide between the personal and the professional erodes.  One of the journalists he interviewed was Oleg Kashin, the Kommersant reporter who discovered the grizzly personal consequences of political journalism when he was the victim of a savage beating.  Kashin today has written an op-ed for Bloomberg in which he gives his take on the opposition movement, and specifically its limitations:

When tens of thousands of demonstrators cheer for Navalny, they don’t see the real person. They see their hopes for a new life in Russia — hopes that are very likely to be misplaced, just as they were when people cheered for Putin in 2000 and Boris Yeltsin in 1991.

For this reason, Putin has nothing to fear from the protests. Demonstrators will come out into the streets for his inauguration in May, and possibly after that, but their numbers will dwindle. Some will make peace with the prospect of another six years of Putin, some will channel their complaints into blogs, some will join the growing number who are packing up and leaving the country entirely.

Russia’s political system doesn’t fit into a simple definition. It’s an autocracy in which people loyal to the regime can exist comfortably. Nobody is forced to repeat slogans or betray their friends and relatives. Corruption is so endemic that it has become an important source of income for a large share of middle-class Russians, including many who took part in the protests. They either benefit directly from kickbacks on government contracts or sell goods and services to people who do.