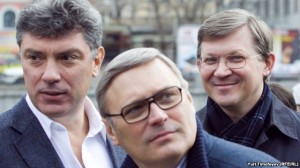 It was announced yesterday that two major opposition groups will merge.  Parnas, the People’s Freedom Party, which was denied registration in June of last year, will join forces with Vladimir Ryzhkov’s long-standing Republican Party of Russia, which regained its legal status thanks to a ruling by Strasbourg in April.  Hence the new party RPR-Parnas should be able to register and mount a formalized party political campaign against Vladimir Putin. Experts have been quick to point out that the party is unlikely to make significant gains at any elections.  Analyst Yevgeny Minchenko, Director-General of the International Institute for Political Expertise, quoted by ITAR-TASS, said the party can hope for ‘3-5% of votes in local elections at best‘.   Others have been more optimistic.  Since one of the main criticisms of the opposition movement is that it is, as a whole, too diffuse, and blighted by the lack of a coherent agenda, the fact that these groups are prioritizing consolidation is perhaps a sign of progress in the battle to strengthen their position.  ITAR-TASS reports:

The party hopes that it will serve as the basis for consolidation of liberal forces in Russia. Vladimir Ryzhkov suggested at the congress for “extending the hand and cooperating with Yabloko, Mikhail Prokhorov and Alexei Kudrin” and called for as broad coalitions as possible when organising public protests. “The broader the coalition, the more people come to the streets. We need as many people possible,” he said.

The Committee of Civil Initiatives (CCI), which is headed by former Finance Minister Alexei Kudrin, is prepared for cooperation with RPR-PARNAS. “There are very big possibilities for cooperation: you being a political wing and we a civil one,” CCI member Yevgeny Gontmakher said at said at the congress. “The values that are stated in this programme are what we call ‘democrats of the first wave’ who were trampled upon,” he added.

Yabloko, which also held its congress this past weekend, is ready to cooperate as well. “The most effective solution we can achieve in the very near future would be not getting in each other’s way. So this is what we will talk about and then we will see,” party head Sergei Mitrokhin said.