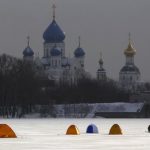 TODAY: Putin says he is ready for a runoff as polls indicate he has lost the majority; EU chief calls for Yavlinsky to be allowed to run; anti-Putin banner facing the Kremlin is removed; Triumfalnaya Square to re-open to protesters; Orthodox Church seeks move into politics; Russia stands firm on Syria.

Responding to indication from recent polls that Putin may fail to win 50% of the vote next month, Vladimir Putin says that he is prepared to face a runoff (‘There is nothing terrible’ about a runoff, he said), but that a second round of voting could ‘destabilis[e] the political situation’.  The Election Commission anticipates that over 600 international observers will monitor voting next month.  The EU’s foreign policy chief, Catherine Ashton, is calling on Russia to review the decision to bar Yabloko candidate Grigory Yavlinsky from running.  Putin’s reign is already over, says Andrei Piontkovsky: ‘It is now only a matter of time before events make that defeat a political reality.’  The BBC reports on pro-Putin sentiment in the Urals, where the Prime Minister is still hugely popular.  ‘Putin pays our pensions.  He gives us bread and cheese, that’s all we need.’ Postal workers at the federal postal service were reportedly sent a letter saying that their participation in a pro-government rally in Moscow this weekend was ‘mandatory’.

A huge banner reading ‘Putin, Go Away’ was erected on a rooftop facing the Kremlin by members of the Solidarity movement yesterday, featuring Putin’s face crossed out; it has since been removed.  Triumfalnaya Square, which has been closed to protesters for a year for ‘construction that never took place’ will be reopened. A prominent doctor is advising protesters not to rally on Saturday due to forecasts of freezing temperatures.  The Moscow Times profiles feminist punk band Pussy Riot, whose performance of ‘Putin Got Scared’ on Red Square last month got them all arrested.  RFE/RL has compiled a collection of viral dissent – the images and videos circulated online by the opposition in lieu of official platforms that allow freedom of expression.  United Russia is accusing Ekho Moskvy Radio of being a ‘revolutionary mouthpiece’, after it published an open letter from Boris Berezovsky.  Dmitry Rogozin’s recent Izvestia article praising Putin was ‘so intemperate’ that ‘it sounds ridiculous’.

The Orthodox Church is becoming increasingly interested in party politics, and is pushing for the Party of the People’s Majority, a Christian party, to register once rules have been relaxed.  Comments made by Jonathan Powell (former U.K. Prime Minister Tony Blair’s chief of staff) about the spy rock ‘are a propaganda gift for Vladimir Putin’, says The Telegraph.  Russia maintains that it will block any U.N. resolution on Syria that it finds unacceptable.  Russia’s Syrian embassy website is under attack by hackers.  Even after its six-year renovation, the Bolshoi ballet is still struggling to reclaim its former splendour: ‘The theatre’s spirit has completely deteriorated.’

On the ‘new designer look’ planned for Russia’s police.

PHOTO: Fisherman’s tents, in spite of freezing temperature, are put up on the Moscow River, with the Nikolo-Perervensky monastery in the background, in Moscow, Russia, Wednesday, Feb. 1, 2012. (AP Photo/Mikhail Metzel)