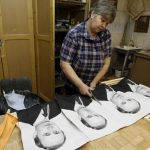 Foreign Minister Sergei Lavrov says that anger over Moscow’s blocking of the U.N. resolution against Syria verges on ‘hysteria’.  Lavrov is in Damascus to deliver a ‘secret’ message to Bashar al-Assad.  ‘If I tell you everything right now, why go?  Then we should communicate through mass media.’ Britain and the U.S. have recalled their ambassadors to Damascus in protest.  This NY Times blog post looks at some other angles on the Syria veto, as does this RIA Novosti article, which portrays Russia as ‘reinforcing its diplomatic clout’ and ‘threatening to put the West in an embarrassing position’.  Chris Weafer says that Russia’s veto is linked to its desire to keep the dialogue open.  Scientists have begun drilling for samples in an Antarctic lake that has been sealed off for 15 million years.

Gennady Zyuganov and Mikhail Prokhorov have taken part in their first presidential campaign debate, repeating ‘familiar promises and accusations’ about socialism and plutocracy; Prokhorov later referred to it as ‘trial by fire’. Dmitry Peskov, Vladimir Putin’s spokesperson, says that Putin’s decision not to debate with his opponents on television before the election ‘won’t have any effect on the democratic process’, and that Putin will win the elections outright in the first round.  Nikolai Petrov suggests that Putin ‘prefer[red] Prokhorov over [Yabloko leader Grigory] Yavlinsky’ because ‘[t]he larger a Russian’s wealth, the more he depends on the Kremlin to preserve that wealth.’  This Vedomosti article says that any claims that the March elections will be conducted honestly is a sham.  RFE/RL has footage supposedly showing a man paying protesters to attend the weekend’s pro-Putin rally in Moscow.

Government officials may soon travel by helicopter to escape Moscow’s worsening traffic jams, if a $200 million project to build landing sites goes ahead.  Discussions with NATO over missile defense have apparently come to a ‘dead end’.  U.S. Senator John McCain has been sending taunting tweets to Vladimir Putin, prompting angry responses from United Russia officials.  The Orthodox Church is to open an anti-superstition hotline to provide ‘clear answers about the practices of the church’.  President Dmitry Medvedev denies that his December reform proposals on gubernatorial elections were related to protest rallies – ‘it is a deeply thought-out position’.  He has also called for a ‘strong right-wing party’ in Russia.

RFE/RL gets to the bottom of rumours that Lenin spoke English with an Irish accent.