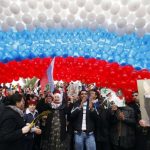 In a televised election debate, Vladimir Zhirinovsky took issue with his sparring partner, a stand-in for Vladimir Putin, over ‘her patron’s refusal to debate and alleged desire to rule for life’; Natalia Narochnitskaya defended Putin as ‘a master debater’.  Nikolaus von Twickel provides a compendium of pre-election dirty tricks and political mudslinging.  Speaking of which, an anonymous group has apparently hacked hundreds of emails between Nashi members and its head, Vasily Yakemenko, detailing ‘payments to journalists and bloggers’.  More info on these alleged payments here.  Yulia Latynina discusses the ideology of Nashi as a ‘fascist call to modernization and war’.  Central Elections Committee head Vladimir Churov has been mentoring media photographers on how to take pictures of polling stations.  Vladimir Putin is making a series of appearances around Russia to consolidate his working-class voter base, most recently at a factory north of Moscow.  His latest pre-election moves include a pledge to cut traffic privileges for officials, a promise to restore winter time,  fear-mongering about a North Caucasus insurgency, and, in an article published in The Guardian, a call for political honesty.

United Russia lawmakers have adopted a statement rejecting any change of power in Russia through a revolution.  The Kremlin has ordered that a public health website be shut down for discussing the addiction medicine methadone, drawing criticism from rights groups.  Foreign Minister Sergei Lavrov was given a ‘royal welcome’ on his arrival in Syria.  His ‘secret’ message to President Bashar al-Assad was apparently that ‘Moscow wants Arab peoples to live in peace’; Lavrov promised after the meeting that Assad was ready to stop violence, although there was no talk of withdrawing troops or freeing detainees.  ‘I have to presume that Lavrov doesn’t care one way or the other about democracy in Syria,’ writes Anne Applebaum.  Interior Ministry investigators have wrapped up the case against lawyer Sergei Magnitsky and passed them to a court; if accepted, Magnitsky could be tried posthumously, which would be the first trial of its kind in Russian legal history.  The Japanese Prime Minister has set his sights on resolving the Kuril Islands dispute with Russia.

Moscow denies that it will instal helicopter landing pads all over the city to aid official commutes.  A ‘schmaltzy’ pro-Putin anthem is proving a source of merriment for the opposition.