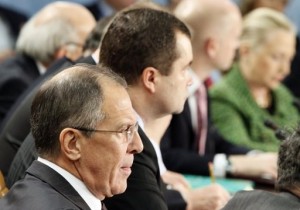 US Secretary of State Hillary Clinton has defended her concerns about the Russian elections as ‘well-founded’, following yesterday’s ‘extraordinary attack’ on the United States by Vladimir Putin, who blamed Mrs Clinton for stoking the opposition movement.  The FSB has apparently requested that Russia’s most popular social network, Vkontakte, disable accounts of groups calling for street protests, but the company rejected the request.  Ria-Novosti reports that opposition activists have been granted permission to hold a 30,000-strong rally in downtown Moscow on Saturday to protest the results of the December 4 parliamentary elections.  Amnesty International has called on the Russian authorities ‘to respect the right to peaceful protests’ in advance of the weekend’s planned demonstrations.  Yesterday police detained ten opposition activists who rallied in St. Petersburg.  Protests against election violations have reached as far as Paris.   The Guardian examines how Nashi ‘are now an important weapon in the Kremlin’s armoury to stifle dissent’.

Brian Whitmore on RFE/RL offers an analysis of the Russian protest movement which points out that the middle class, which Putin seemingly helped to create, has now turned against him.  Tycoon and one time leader of Right Cause, Mikhail Prokhorov, gives his verdict: ‘the majority of our people think the elections were unfair […] But whether they like it or not, Putin is so far the only figure who can manage this inefficient state machine.’   The Telegraph considers the special place Alexey Navanly has carved for himself within the opposition.  RFE/RL reports on how two local politicians have paid the price for United Russia’s poor performance in their regions.  President Medvedev has pledged that all allegations of fraud should be investigated.

The Interior Ministry has rejected the findings of a new report by Hermitage Capital over the death in custody of its lawyer Sergei Magnitsky.  Investigators have reopened a probe into the deceased auditor, apparently so that his family can use fight for the rehabilitation of his reputation.  ‘There are no untouchables for the Investigative Committee’ says its head, Alexander Bastrykin, who claims that nearly 600 Russian officials were prosecuted on corruption charges during the first nine months of this year as the world marks the International Day against Corruption.

A new book by Russia-watcher David Satter considers ‘unfinished emotional processing, on both the level of the state and in the Russian psyche, of the great human tragedy of the Soviet Union’.  Reuters reports on how nostalgia for the days of communism in the CIS ‘is honey to the soul of Russian Prime Minister Vladimir Putin’.  A Russian court has closed the case against historian Mikhail Suprun accused of illegally revealing personal data about ethnic Germans in the Soviet Union.

Russia has warned that time is running out to conclude a missile defense deal with NATO as the two sides continue to lock horns over the project.  Foreign Minister Sergei Lavrov has warned NATO counterparts against attempting to influence upheavals in the Arab world as it could ‘blow this whole geopolitical space up’.   The electoral impasse continues in South Ossetia.