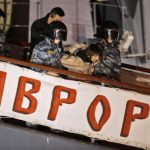 President Dmitry Medvedev (who has ‘kept the presidential seat warm until Putin can be re-elected next year’) tried to get his supporters excited about his upcoming premiership over the weekend during a speech in which he promised a government of fresh faces next year, outlined plans to reconstruct the United Russia party, and defended his decision to step aside to allow Vladimir Putin return to the presidency as the result of ‘sufficiently long analysis’. Putin meanwhile pooh-poohed the notion that Russian citizens don’t have any real political choice.  ‘It is [Dmitry Peskov’s] job to put a positive spin on the neo-Brezhnevite stagnation that Russia will enter with his boss’ return to the presidency in 2012.’  A pro-Putin analyst rues the Prime Minister’s disregard for the rule of law.  Duma deputy Ashot Egiazaryan agrees: ‘Russian citizens need a system that allows for official accountability’ –  but this businessman says that neither ‘markets [n]or geopolitics’ care about the rule of law.

Australia is criticising Russia for ‘cheque-book diplomacy’ after the latter persuaded Tuvalu to set up formal ties with South Ossetia and Abkhazia.  Russia’s Latvian supporters are protesting their right to have a voice in the coalition.  Sergei Udaltsov, the leader of the Left Front movement, imprisoned and on a hunger strike for three days, has reportedly been denied proper medical care and sent back to jail, despite complaints of chest pains.  Nashi members reportedly managed to cut off the electricity supplying an opposition conference in Krasnodar.  U.S. Assistant Secretary of State Michael Posner has spoken out against Russian human rights following a meeting with Khimki forest activists, saying that the reset should seek to improve these matters.  The Washington Post documents his visit and interaction with activists and opposition politicians.  President Ali Abudllah Saleh said he expects China and Russia to block U.N. moves to end his rule, after five Yemeni protesters were killed in Sanaa yesterday.

‘Today, [Mikhail] Prokhorov’s program remains the only tangible result of the $26 million that he and his friends invested in his campaign. He is probably sorrier for the loss of three months of his time.’  Vladimir Zhirinovsky insists that ‘a load of horse feathers’ regarding a stamp in his passport will not prevent him from being registered for the elections in Oryol.  Is Marina Litvinenko’s public appeal for help in funding her legal costs indicative of Boris Berezovsky’s dwindling fortune?  The wife of murdered spy has successfully won a battle calling for an open investigation into Alexander Litvinenko’s death.  A new inquiry has reportedly been opened into Yulia Tymoshenko, in connection with her company’s debt to the Russian Defense Ministry.

On the city of Ufa.  Will the Nagorno-Karabakh conflict be worsened by an Armenian purchase of Moldovan rockets?

PHOTO: Police detain protesters who sat atop a yard of mast of the Aurora cruiser in St.Petersburg, Russia, Sunday, Oct. 16, 2011. Several members of Food Not Bombs movement climb on Aurora mast protesting against wars and poverty. The navy cruiser Aurora, now anchored in the Neva river, fired the shot that started the Bolshevik Revolution in 1917. (AP Photo/Dmitry Lovetsky)