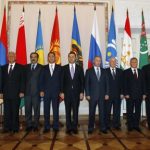 Following talks in St Petersburg, Russia has signed a free trade agreement with CIS member states Ukraine, Belarus, Kazakhstan, Armenia, Kyrgyzstan, Moldova and Tajikistan, as Vladimir Putin promised that the move would ‘mak[e] our economies more competitive’.  The Prime Minister is also pushing for closer integration between ex-Soviet states, which is currently ‘top of his agenda’.  Uzbekistan, Azerbaijan and Turkmenistan failed to sign, but have not ruled out doing so before the end of the year.  Putin has hinted that Dmitry Medvedev will not necessarily step into the premiership next year, and that his future role will depend on how United Russia fares in the December elections.  On Putin’s ‘patronage system’.  An Amnesty International report reveals the roles of Russia, Europe and the U.S. in arming the Arab Spring.

The U.S. says it will provide Moscow with written assurance that NATO’s defense shield is not a threat.  It has also invited Russia to use its own technology and means to evaluate missile-defense flight tests to satisfy itself.  The state organisation that funds political youth groups like Nashi could be granted more powers.  As the Occupy movement grows globally, observers wonder whether Russia is going to join in.  ‘[T]here is no doubt that the government is rightly very concerned.’  20 people were reportedly detained in Moscow for protesting the lack of opposition parties to vote for in the upcoming elections.

Ekaterina Zatuliveter, the Russian political aide fighting deportation from England, has admitted that she was having an affair with her boss, but denies allegations of espionage, despite also admitting to affairs ‘with a Nato official, a Dutch diplomat and a senior UN official.’

Yulia Latynina writes on the case against Yulia Tymoshenko.  Marina Litvinenko talks to The Guardian.

PHOTO: Prime Ministers from the Commonwealth of Independent States (CIS) countries pose for photos during a meeting in St. Petersburg October 18, 2011. REUTERS/Alexander Demianchuk