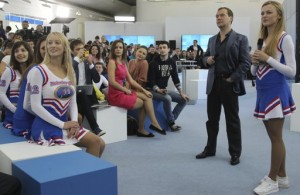 Russia’s nationalist contingency may be a bigger threat to Vladimir Putin’s government than its direct opponents, says the Guardian, reporting on the rampant rise of the far right.  United Russia’s election tactics are being criticised after their most recent advertisement in which a couple emerge ‘dishevelled’ from a voting booth: ‘United Russia has forgotten that voting in Russia is meant to be secret’ (RFE/RL has the video, along with a list of Russia’s most unpopular regional leaders).  Golos, a Moscow-based NGO, has already registered over 1,000 violations of election laws, and there is still a month remaining before the December 4 vote.  Former United Russia member Maksim Dudarev, imprisoned for fraud after making allegations about the fraudulent sale of Yukos, has had his parole request denied.  The Other Russia reports that activists arrested at Moscow events yesterday were not given any reasons for their detention.

Former Mayor Yury Luzhkov has returned to Moscow to face questioning over a $427 million embezzlement case, and anticipates that he himself may become a suspect.  The UN’s report on Iran’s nuclear weapons programme is ‘biased’, and not a cause for further sanctions, says Moscow, slamming the proposal as ‘an instrument for regime change’ (which of course it is, agrees Bloomberg), and acting as spokesperson for Iran, insisting that it ‘wants to resolve all outstanding issues with the IAEA’.  Russia has offered its support for the Italian government’s (and close friend of Vladimir Putin, Silvio Berlusconi’s) measures to stabilise its economy, despite news that Italy is now in ‘bailout territory’.  World Trade Organisation membership is moving closer thanks to yesterday’s bilateral trade deal with Georgia; working groups are meeting today and tomorrow, and a final decision is expected for December 15.  The BBC considers Georgia’s chances of joining NATO, saying that tensions with Russia are a hindrance.

Russia has to add its Mars probe to a series of space launch failures, as engineers attempt to save the Phobos-Grunt’s mission.  In a bid to ‘expand my presence on the internet,’ President Dmitry Medvedev has opened an account on social networking site Vkontakte.