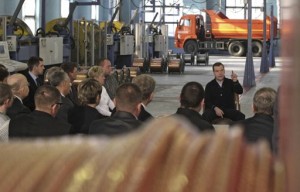 A Just Russia is promising to hold a rally if opposition election monitors uncover a discrepancy between the official vote and observer numbers after next month’s vote.  Iran is attempting to maximise Russia’s light stance on its nuclear programme, asking it to work on a number of ‘support-for-money’ deals which ‘could help Tehran dodge UN sanctions threatened by Western powers’.  The Phobos-Grunt spacecraft could come ‘crashing back to earth’ if problems are not solved within two weeks.  The final terms for Russia’s accession to the World Trade Organisation have been agreed, 18 years after negotiations began, paving the way for a €4 billion injection into the European economy.  The Kyiv Post wonders whether Russia will blaze a trail for Kazakhstan and Belarus.

Today’s Moscow Times editorial considers the evidence that the inner circle Vladimir Putin’s government is a mafia-style operation controlling a significant portion of Russia’s wealth.  The head of the Center for Political Technologies says that United Russia is ruining its own image ahead of the elections with conflicting messages about pensions.  Former police captain Maxim Kagansky says that the fraud case against him was fabricated to influence an Interior Ministry power struggle.  Two U.S. senators are urging the Secretary of State to review the visa applications of two Russian Interior Ministry officials, saying that their involvement in the ‘sweeping cover-up’ of the circumstances surrounding the death of Sergei Magnitsky should bar them from the country.

Does Putin think of himself as the Pyotr Stolypin of his generation?