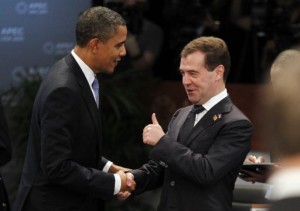 The annual Asia-Pacific Economic Cooperation conference was held in Honolulu over the weekend; Presidents Medvedev and Obama praised each other for ongoing cooperation and Russia’s imminent WTO accession (‘Obama found it incomprehensible that a country the size and importance of Russia was outside the WTO’, on the other side, the New York Times says that ‘the Russian government has been ambivalent about the merits of joining a group that would limit its policy choices’); the U.S. president said that China and Russia share his objective of ensuring that Iran does not make nuclear weapons.  Medvedev has expressed confusion about what the U.S. is offering in terms of its European missile defense system and says that the two sides remain ‘far apart’ on the issue.  He also met with Japanese Prime Minister Yoshihiko Noda to discuss possible cooperation in defense and security, urging Noda to put trade before politics on the question of the Kuril Islands.

Under a bill introduced by United Russia in St. Petersburg, a draft law was put together last week lumping all pedophilia ‘propaganda’ under the same law as that prohibiting that relating to homosexual, bisexual and transgender practices.  LGBT activists will attempt their seventh Pride parade next May.  Despite a war of words in the wake of the ouster of Mikhail Prokhorov from the Right Cause party, Kremlin deputy Vladislav Surkov says he has good relations with the businessman – although possibly not mutual ones.  A Just Russia is facing charges for violating public transportation laws over posters using the slogan ‘For Russia Without Swindlers and Thieves’ (a veiled reference to United Russia).

Prime Minister Vladimir Putin has defended accusations of political inertia in Russia, saying that his first presidency ended a civil war and spurred economic growth, but also admitted that the government is ‘thinking about ways for citizens to feel a stronger connection to the authorities’, conceding that political power is too centralised.  He also disavowed any Kremlin interested in ‘personal power’ (BBC has video).  A Russian Soyuz space capsule has successfully blasted off from Kazakhstan; but has the Phobos-Grunt space probe disappeared?  South Ossetia held an election yesterday: ‘No process in the region of South Ossetia can ever be called an election,’ said the Georgian Reintegration Minister; the region is to adopt Russian as its second official language.

Where did Russia’s stereotypes of the Caucasus come from?: RFE/RL interviews Susan Layton.  On the paper industry city of Syktyvkar.