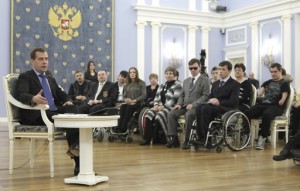 Former U.S. Secretary of State Condoleezza Rice says that Vladimir Putin’s plan to run for a third term as president ‘makes a bit of a mockery of the electoral process’, and called the move ‘unfortunate’.  A Levada Center poll indicates that a quarter of Russians believe that the incumbent President has fostered a cult of personality around himself, but has Russia ‘used up its quota of revolutions’?  Putin says he wants to channel ‘practical, real aid’ to Europe through the International Monetary Fund.  A spokesperson at the U.S. State Department called on the Russian government to hold accountable officials involved in the death of lawyer Sergei Magnitsky two years ago.  The BBC discusses Russia’s ‘staunch position of defence’ for the Syrian leadership. ‘Russia doesn’t want to be seen as siding with anything that resembles regime change,’ although it is maintaining dialogue with the opposition.  Matvei Tsivinyuk has exposed illegal electioneering at his school by secretly recording a telling off from his headmaster after he defaced United Russia posters up in the school lobby – RFE/RL has a transcription of the dialogue.

St. Petersburg legislators are drawing up a bill that would fine members of the LGBT community for openly stating their orientation by outlawing parades, public discussion and display.  The real worry about alcoholism relates to Russia’s teenagers, whose drinking has been rising as adult alcoholism declines, says a new study.  President Dmitry Medvedev is reaching out to the disabled, urging them to participate in ‘big government’ projects.  The New York Times reports on current reprisals against ethnic Tajik migrants.

Mary Dejevsky’s Russia notebook documents dinner with Putin at his favourite restaurant.  Bloomberg Television’s Russia series starts here with a visit to Yaroslavl.  Putin’s Chinese ‘twin’.  On the revolution of the Bolshoi ballet.