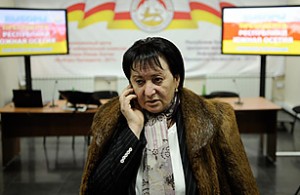 Following on from Putin’s criticisms of ‘foreign-sponsored bodies’ at his UR congress speech on Sunday, the authorities have apparently continued to menace independent election watchdog Golos.  Details of how the campaign has worked emerged during a news conference yesterday with Golos director Liliya Shibanova who spoke of security services ‘exerting colossal pressure’ on its regional directors, in one case even ‘prompting the group to hire a psychologist to help cope with the stress‘.  The watchdog’s deputy director, Grigory Melkonyants, has called it ‘a well-thought-out national campaign’ in an article in the Washington Post.  Meanwhile the ‘opposition’ have launched an attacked too, with lawmakers from the Liberal Democratic Party and A Just Russia (as well as UR)  demanding an investigation into whether the watchdog received U.S. financing.

Bloomberg reports that the Communists, the nationalist Liberal Democratic Party and Just Russia all say their candidates and activists have been beaten and arrested in the run-up to the elections, which Putin’s spokesman, Dmitry Peskov, has vociferously denied.  The New York Times has an interview with Yabloko founder Grigory Yavlinsky, who sees little hope for a Russia overseen by Putin who, he claims, ‘acts like the head of a major corporation, but there is a major difference between a corporation and a country’.  According to the Moscow Times, United Russia has made a deal with the other three parliamentary parties who will pretend ‘to play the opposition’ in exchange for guarantees that they will secure seats in the next State Duma; evidence perhaps that the ruling party has serious concerns about its popularity.  Apathy is the overall feeling among citizens, says a new opinion poll which has found that less than half of Russians are paying attention to the campaign trail.  Is blogging the only hope for the Kremlin’s critics? wonders Reuters.

Tensions are rising in South Ossetia after troops fired warning shots at a rally of thousands of supporters of Alla Dzhioyev, whose apparent victory in the presidential elections has proved irksome to the Kremlin, who backed her rival Anatoly Bibilov.  Time Magazine has the full scoop on the Kremlin’s plans for the elections in the breakaway region.  Russia meanwhile maintains it has ‘no intention to interfere into its (South Ossetia’s) internal affairs’.

Cedric Tuschi, the maker of a documentary about Mikhail Khodorkovsky has expressed his disappointment that no Kremlin insiders attended the film’s media screening last week to ‘have an open discussion’.  A Moscow court has prolonged for a further six months the detention of ailing businesswoman Natalya Gulevich, which her lawyer believes is tantamount to a death sentence for his client.  Influential lawyer Igor Trunov has apparently announced his plans to challenge the powers of the Interstate Aviation Committee following the Yaroslavl crash and a series of other air disasters which have raised dramatic concerns about the parlous state of aviation safety.

The number of new HIV infections in Russia rose almost 10% in January-October 2011 year-on-year, a leading Russian expert on HIV/AIDS has announced.  A new report by UNICEF has found that Russia has the third-highest number of suicides among teenagers in the world.