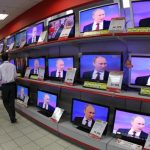 Vladimir Putin’s open contempt for protesters (saying he confused their white ribbon symbols for condoms and alleging that student protesters were paid to rally) during his Q&A yesterday ‘is bound to boost the protest mood further’.  Is he just out of touch?  Putin’s suggestion that web cameras be installed at polling stations is a top story on the BBC.  Alexei Kudrin says there is ‘no need to provoke’ those already dissatisfied with the government, as Putin hinted that the former Finance Minister could have a future government role.  Reuters interviews some of Putin’s regional supporters.  A government reshuffle has seen chief of staff Sergei Naryshkin and Deputy Prime Minister Alexander Zhukov stepping down into Duma seats, with Vladislav Surkov replacing the former.  ‘The promotion will put Surkov in an unusual spot,’ says Brian Whitmore.

Mikhail Prokhorov has promised to pardon Mikhail Khodorkovsky (spurring hints of a similar concession from Vladimir Putin), allow free registration for opposition parties, and restore provincial elections for governors if he wins the presidential elections.  Eduard Limonov is apparently also mounting an election bid.  Gadzhimurat Kamalov, the founder of a corruption whistleblowing newspaper in the North Caucasus, has been shot to death outside his office.  Russia’s UN Security Council resolution on Syria has ‘surprised’ Western powers.

The EU Parliament is backing an EU-wide travel ban and asset freeze on officials linked to the death of Sergei Magnitsky; progress is being made on visa-free travel to the EU for (non-blacklisted) Russian citizens.  Opposition activist Sergei Udaltsov has been hospitalized for the third time in connection with his hunger strike following his arrest on election day.  Today’s Moscow Times editorial slams the authorities’ handling of the recent elections.  Chukotka’s authorities are trying to release 100 beluga whales trapped by ice in the Bering Sea.

The minister responsible for the rumour that badminton was to become an official Defense Ministry pastime has been demoted.  Putin > botox?