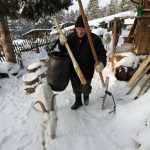 Mikhail Prokhorov says that he has collected the two million signatures needed in order to secure a place on the presidential ballot in March, has apparently amassed a campaign fund four times the size of Vladimir Putin’s, and is accusing opposition leaders of colluding with the Kremlin.  Liberal leader Grigory Yavlinsky has also collected his signature quota.  Reasons were not provided for the dismissal of Arkhangelsk Governor Ilya Mikhalchuk – could it be connected to United Russia’s poor results in the region at the last elections?  Two Yabloko officials, including deputy chairman Sergei Mitrokhin, have been detained following a rally against election fraud. Opposition leaders, including poet Dmitry Bykov, journalist Sergei Parkhomenko and author Boris Akunin, have rejected invitations to attend a ceremony with Vladimir Putin, with some expressing suspicion about the Prime Minister’s motives.  A website designed to promote Putin’s presidential campaign has mysteriously removed its own function for ‘liking’ certain comments, after posts urging him to step down received an overwhelmingly positive response.  Putin has promised to eradicate the problem of poverty by 2020, reiterated his vision of himself as Russia’s saviour, and broadly criticised the opposition for a lack of ideas.  Dmitry Rogozin, Russia’s NATO ambassador, says that any military intervention linked to Iran’s nuclear program would be viewed as a direct threat to Russian security.

The Guardian profiles the rise of Alexei Navalny.  This New York Times blog piece notes the failure of recent attempts to mock Navalny (including this piece, comparing him to Hitler, and a counter-piece here which responded to a doctored photograph posing Navalny next to Boris Berezovsky with a series of photos placing him next to, among others, Arnold Schwarzenegger and an alien).  Vladimir Frolov fantasises about a Navalny-Kudrin leadership dream team. The State Duma has ratified the  Organization for Economic Cooperation and Development’s anti-bribery convention – a key step towards membership.  Debris from the Phobos-Grunt spacecraft has fallen into the Pacific Ocean (after Roscosmos predicted that it would fall into the Atlantic) off the coast of Chile.

The Obama administration’s new U.S. ambassador to Russia, Michael McFaul, has arrived in Moscow to rescue the ‘reset’, as the Foreign Ministry accuses the U.S. of breaking international law by keeping terror suspects in custody at Guantanamo Bay, and slates the U.S. $662 billion defense spending plan for 2012.  The Foreign Ministry is also planning to start releasing annual reports on human rights violations in other countries.  An exiled Tajik opposition leader has survived being stabbed in Moscow; the head of a regional anti-monopoly department in the Ivanovo region has been hospitalised after being wounded in a shooting attack.

PHOTO: Victor Gavenko, 76, carries a barrel of snow in the village of Pravy in the Taiga district, some 75 km northeast of Russia’s Siberian city of Krasnoyarsk, January 16, 2012.  REUTERS/Ilya Naymushin