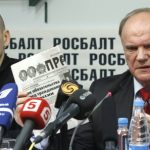 Opposition politicians and activists were filmed by pro-Kremlin youth activists as they left a meeting with Russia’s new U.S. Ambassador, Michael McFaul, who is pursuing a policy of ‘dual-track engagement‘ with both official and oppositional figures.  Vasily Yakemenko, the head of the Federal Youth Agency and former head of Nashi, is blaming last month’s anti-government protests on Dmitry Medvedev’s failure to live up to his promises about freedom, claiming that the root of unrest was Medvedev’s decision not to run for re-election.  Communist leader Gennady Zyuganov has signed an election platform drawn up by Vadim Kuzmin and Sergei Udaltsov, ‘marking the first concrete merger between street protesters and leaders of the so-called “established opposition”.’  Journalist Pavel Lobkov’s contract at NTV has been discontinued after he attempted to broadcast footage about vote-rigging. ‘We had an agreement to prolong the contract to continue other projects.  The decision was changed after my political activities became excessive,’ he said.  95 people have been charged for election fraud during the last polls.

Mikhail Prokhorov (profiled today by Reuters) denies that he is being used by the Kremlin ‘to shunt middle-class anger into a safe channel’, and declared that if he wins the election, he will have either Alexei Kudrin or Mikhail Khodorkovsky as his premier.  Presidential candidate Sergei Mironov is calling for Vladimir Putin to go; his competitor, Vladimir Zhirinovsky, has had a lawsuit brought against him for an unfortunate comment about the entire population of the Urals.  Vladimir Ryzhkov summarises the ‘Decembrists 2.0’ list of demands.  President Medvedev has now fired his third governor (Volgograd Governor Anatoly Brovko ‘stepped down’) since the state elections last month – again supposedly in connection with poor results for United Russia.

Members of Sergei Magnitsky’s family say they are being harassed by Interior Ministry officials who are pursuing a posthumous case against the lawyer, who died in pre-trial detention in 2009.  The U.S.’s U.N. Ambassador has expressed ‘very grave concern’ about a delivery of Russian arms to Syria’s Assad regime; Foreign Minister Sergei Lavrov says that Russia has no intention to justify its actions to the United States.  Lavrov says that time is running out for the two sides to find a resolution for the missile defense question, and has spoken out against any new sanctions against Iran.

On Russia’s last Red Cross outpost in Addis Ababa.  A middle-school group in St Petersburg, who named themselves 14/88 (a neo-Nazi sign), has won a tolerance competition.  The army is struggling to keep up its quota of recruits this year, thanks to draft-dodging and demographic decline.