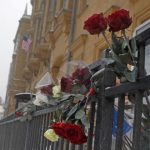 Could the Kremlin be plotting to address sagging support for United Russia by dismantling the party altogether?  The party’s long-term top official, Andrei Vorobyov, resigned over the weekend.  Vladimir Putin’s campaign manager says corruption in Russia used to be ‘civilized’, as Europe’s PACE Assembly says that all presidential candidates are accusing the Prime Minister of abusing his administrative resources for his presidential campaign.  PACE head Tiny Kox also said that the Assembly has been denied access to Putin, having been told that ‘a meeting does not fit’ into his plans.  Putin’s most recent election promise is that he will reverse Russia’s demographic decline.  Hacked Nashi emails make the state agency ‘look like a branch of the Cosa Nostra,’ says Viktor Davidoff.  Organisers of last week’s pro-Kremlin rally were fined $33 for exceeding attendance limits.  A handful of whom appear in an online gallery here) face a similar fine.

The ‘sheer variety and brio of Russian programming’ is a testament to Vladimir Putin’s ‘long, complicated reign,’ says this New York times piece about state-controlled television.  The head of the St. Petersburg police force has been stripped of his post and forcibly evicted from his office by a group of officers in riot gear, a move related to ‘power struggles’ and an investigation into the death of a young boy in custody.  Alexei Bayer describes former Moscow Mayor Yury Luzhkov as ‘a thoroughly corrupt mayor who ran the city as his personal fiefdom‘.  Russia may halt adoptions of Russian children by U.S. citizens, citing ‘numerous’ cases of abuse that were not properly penalised.

An engineer who worked at the Plesetsk space center has been sentenced to 13 years in prison for passing information to the C.I.A.  United Russia member and former heavyweight boxer Nikolai Valuev has spoken of his new experience as a parliament deputy.  Kathy Lally on Russia’s harsh winters.