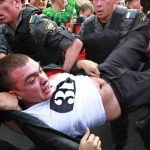 A dozen Strategy 31 activists were detained yesterday – ‘minutes after they unfurled anti-Kremlin banners’ – at a sit-down protest near Triumfalnaya Square in Moscow.  They have since been released.  The Other Russia has some details: ‘In an unprecedented move, police refrained from arresting Strategy 31 co-organizer and Other Russia party leader Eduard Limonov when he joined the sit-in.’  Having recognised the Libyan Transitional National Council, Russia will send its special envoy for Africa and the Middle East to take part in today’s French-hosted ‘Friends of Libya’ conference in a bid to uphold its interests in the country.  Reuters has compiled a timeline of significant events in the Putin-Medvedev tandem, as the President indicates that he would like to stay on in the role if Putin decides not to run; this analysis suggests that this week’s Rosneft-Exxon tie-up, presided over by the Prime Minister, strongly indicates that this will not be the case.  ‘Putin’s fingerprints [are] all over’ the appointment of Georgy Poltavchenko as Governor of St. Petersburg.

Alexander Peshekhonov, a village police chief in Krasnodar, was found dead in his car beside a suicide note that accused his superiors of corruption.  Mikhail Khodorkovsky’s request for parole has been deflated by ‘petty alleged violations’ such as sharing cigarettes.  Employers and educational institutions are reportedly starting to crack down on fake high school diplomas.  ‘The problem [with the Unified State Exam] is that the new system forces students to focus all their efforts on passing tests in two or three main subjects and makes every other subject irrelevant. It is frightening to imagine what type of voters these students will become.’