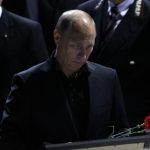 The Kremlin is trying to dumb down anticipations that today’s meetings between UK Prime Minister David Cameron and Russia’s ruling tandem will lead to a new leaf in troubled relations, apparently because things are fine as they are: ‘No one is expecting any breakthroughs, and in fact they are not needed […] We will continue to work the way that we have been working in the past.’  Exiled businessman Boris Berezovsky says that the meeting is a ‘historical mistake’, referring to Putin as a ‘gangster’.  The exchange will be followed by ‘peace-making loans’ of British art by Antony Gormley and Willliam Blake, which The Guardian is calling ‘a remarkable thaw in cultural diplomatic relations’.  Amid mounting international pressure on Cameron to enforce a travel ban on officials linked to the death of Sergei Magnitsky, Denis MacShane wonders whether the British PM will even mention the case during his visit.  Andrei Lugovoi, meanwhile, suspected of killing Alexander Litvinenko in 2006, has challenged Cameron to meet with him.  Mikhail Khodorkovsky has spoken to the Telegraph about his hopes for the visit.  The Russian embassy in London has been the victim of a suspected hacking attack.

In response to the Yak-42 plane crash that killed 43 passengers, the Kremlin is proposing new measures to punish flight safety violations.  The majority of Russian media commentators echo the sentiments of this Rosbalt writer: ‘The inarticulate and vague speech’ given by President Dmitry Medvedev in Yaroslavl last week ‘is practically becoming his personal trademark.’  The speech showed that the President is ‘not prepared to fight for his job’, says the New York Times.

Despite having quit the party in 2008, Yabloko’s co-founder Grigory Yavlinsky will return to head the party’s list in the Duma elections this December.  A Kremlin envoy has openly criticized Chechen leader Ramzan Kadyrov – a leader not used to government criticism.  ‘Medvedev’s hard-line stance toward [Ukrainian President] Yanukovych is indicative of his desire to closely align himself with Putin in an effort to secure his blessing for a second presidential term,’ suggests Vladimir Frolov.  A Duma speaker says that Mikhail Khodorkovsky should have the right to parole.

The Moscow Times profiles the city of Sochi.