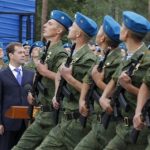 Russia is dissatisfied with the ‘absence of progress’ made in talks with NATO regarding the US-led missile shield, which is progressing on the ground, with Romania this week agreeing to host interceptors which will be deployed within four years.  A Russian proposal to open a joint investigation into the 2006 death of Alexander Litvinenko has been rejected by the British government.  Prime Minister David Cameron’s visit to Moscow should be seen not as an attempt to resume relations, but as ‘two middle-ranking, post-imperial powers groping for some sort of modern relationship, with each other and with Europe,’ says the FT.  Alexander Sizov, the sole remaining survivor of the Yak-42 plane crash that killed the Yaroslavl hockey team, has regained consciousness in hospital, amid reports that the crash was caused by the pilots’ failure to remove the parking brake during takeoff.  Kontinental Hockey League President Alexander Medvedev says that the crash could improve strained relations with the NHL.

Sochi residents, evicted from their homes to make way for Olympic construction, have rallied for the sixth time this year, claiming that hundreds of residents have had their belongings crushed by bulldozers.  This New York Times editorial reminds readers that the case of Anna Politkovskaya remains unsolved.  The Supreme Court has ruled that the six months spent in pretrial detention by former Yukos CEO Mikhail Khodorkovsky was a gross violation of legislation, saying that in fact, Khodorkovsky (and his partner, Platon Lebedev), should have been in prison.

Vladimir Zhirinovsky is anticipating that his Liberal Democratic Party will garner a quarter of the votes during the December elections.  Moscow Mayor Sergei Sobyanin continues to deny that his wife has any connection to the large-scale project to repave the city’s sidewalks.