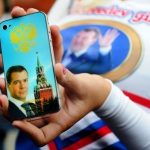 Right Cause Party leader Mikhail Prokhorov is accusing the Kremlin of trying to stage a coup and oust him from the party, saying that there’s ‘no way’ he will leave.  Prokhorov also claims that the government replaced delegates at his party conference with ‘doubles’ – critics suggested that his claims were publicity stunts designed to make the party look more independent than it really is.  Europe wants to send 260 delegates to monitor the December Duma elections – ‘this is not a figure put on the table to have some bargaining’ – but Russia is bargaining.  Chechen leader Ramzan Kadyrov won his region’s United Russia primaries with 100% of the vote.  The editor of Russia’s Esquire magazine is leaving his post; he says there’s nothing political behind the move, he merely wants to start a children’s camp.

A poll of Russian economists reveals expectation that Vladimir Putin will return to the presidency next year.  Although President Dmitry Medvedev’s likability rating remains high, it seems that few Russians believe that the President has won any real successes during his time in office.  Medvedev’s close adviser, Arkady Dvorkovich, says that a reshuffling of key ministers is necessary, and likely to take place after the March elections.  ‘The Kremlin is keen to point out that Dmitry Medvedev does have a sense of humour.’  The BBC reports on the state suppression of a comedy sketch that parodied the President’s dance moves (you can also see the censored clip here).

An update on the Lokomotiv Yaroslavl plane crash.  Pacific gray whales are being tracked off of Russia’s coastline.  U.S. President Barack Obama’s nominee for the role of ambassador to Moscow has been revealed.  A colonel previously in charge of clearing up space debris is being charged with fraud relating to ‘fictitious contracts’.