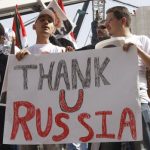 A tens-of-thousands-strong rally in Damascus showed support for President Bashar Assad and ‘was also meant to thank Russia and China’ for their U.N. vetoes.  U.S. National Security Council senior director for Russia, Michael McFaul, says that Iran is one of the most important issues in U.S.-Russia relations, dominating diplomatic talks, and pledged to turn his attention to deepening U.S. engagement with Russian civil society if he is appointed ambassador to Moscow.  In the meantime, he insists that the ‘reset’ program is working, and urged Washington to give ‘unconditional permanent normal trading relations’ to Russian goods.  The Power Vertical interviews Yabloko party founder Grigory Yavlinsky: ‘What does [Putin’s return] mean? It means the preservation of the previous style and the previous agenda. It means the same faces on television. It means everything will remain the same. People can’t take this anymore.’  On the online acts of ‘civic campaigning’ that allow Russian bloggers to function as viable alternative media sources.

The Other Russia reports that 200 activists took part in a sanctioned ‘Day of Wrath’ rally in Teatralnaya Square, near the Kremlin, yesterday – with four arrests.  A group of activists protested outside the presidential administration building yesterday against Moscow’s plan to sent 26,000 stray dogs to a facility on the city’s outskirts.  Vladimir Putin’s deputy, Igor Shuvalov, is taking on more of the duties that former Finance Minister Alexei Kudrin has been forced to abandon.

On Russian cryptozoology and the resurgence of interest in the yeti.

PHOTO: Syrian regime supporters hold a pro-Russia banner during a demonstration to show their support for President Bashar Assad and to thank Russia and China for blocking a U.N. Security Council resolution condemning Syria for its brutal crackdown, in Damascus, Syria, on Wednesday Oct. 12, 2011. (AP Photo/Muzaffar Salman)