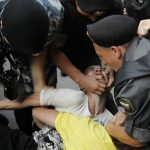 RIA Novosti is offering scant details, but says that 40 protesters were arrested in Moscow on Sunday for participating in an unsanctioned rally.  The protesters were part of the Strategy 31 movement, which rallies for freedom of assembly, and were not detained until they broke their initial seated protest to march towards the Kremlin, says the Washington Post.  Other reports suggest that there were only 20 protesters in Moscow, flanked by 100 journalists.  A similar protest was also reportedly held in St. Petersburg, with 50 arrests.  Press TV says that the Moscow protesters called for a boycott of the upcoming elections.  Most of the blame in Poland’s official report on the Smolensk plane crash lands on Polish officials, but it also states that Russian air traffic controllers gave incorrect and confusing landing instructions to pilots, and blames the crash, finally, on ‘an accumulation of causes’.  Abortion laws are set to get tougher, says RFE/RL, with a number of legislative changes on the cards later this year, including the possible scrapping of free abortions at state clinics.  The lawyer of British businessman Darren Keane, of the Storm International gambling holding, is likening him to Sergei Magnitsky, as he is severely ill in pretrial detention and ‘could die at any moment’.

Secrecy surrounding St. Petersburg Governor Valentina Matviyenko’s registration for council elections means that opposition parties will not be able to offer candidates to challenge her.  Vladimir Frolov says that there is no chance that the 2012 presidential elections will lead to a repeat of the tandem rule.  A new intergovernmental commission set up by President Dmitry Medvedev will report on extremist activities, spurring fears of a pre-election opposition crackdown.  Last week’s powerful attacks on the server providers of LiveJournal, the seat of Russia’s broad online political opinions amount to ‘cyber war’, and the ‘political smoking gun’ is obvious, says this article.

Despite Supreme Court orders for a retrial, businessman and prison blogger Vladimir Kozlov will not be released.  Ellen Barry tries to make sense of the recent and peculiar Georgian photographer spy scandal.  An overloaded riverboat sank on the Moscow River yesterday, killing 9 of its 16 passengers.  A tornado hit Blagoveshchensk on the weekend, killing one and injuring dozens.  The Moscow Times profiles Nizhny Novgorod.

PHOTO: An activist is detained by police during a protest action to defend Article 31 of the Russian constitution in Moscow July 31, 2011. (Article 31 guarantees the right of assembly.) REUTERS/Denis Sinyakov