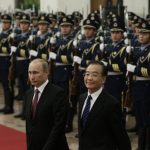 Prime Minister Vladimir Putin is in China to sign a raft of deals; Reuters suggests that there are too many obstacles for a deal to be reached during the visit (such as spying accusations and delayed projects), despite ‘mutual vows of goodwill’, due to a number of disagreements and obstacles.  ‘The sides will focus on the structure of bilateral trade, the expansion of mutual investment and cooperation in hi-tech industry, and the implementation of long-term energy projects.’  Former Deputy Prime Minister and Finance Minister Alexei Kudrin has been dismissed from his military-industrial and economic development government posts.  NATO Secretary General Anders Fogh Rasmussen wants to reach a missile shield agreement with Russia next May.

A criminal investigation has been opened into the death in pretrial detention of Moscow high school principal Andrei Kudoyarov.  A small group of military officers picketed the Defense Ministry yesterday claiming that they have not been provided with the housing promised them.  10 AIDS patients were reportedly detained by police for demanding improved treatment and seeking to spread awareness of the problems faced by Russians who have the disease.  Journalist Aleksandr Zverkov speaks to RFE/RL about the power that local authorities have over journalists, after losing his job for reporting on garbage disposal.  The appointment of an ‘opposition-minded journalist’ as the new editor of Russia’s Esquire magazine ‘suggests that the magazine will maintain its willingness to butt heads with the authorities’.  Veteran Red Cross leader Irina Lernochinskaya receives regular anonymous threats.

Suspicions are running high after Siberian officials said they were ‘95% sure’ of the Yeti’s existence.  Is United Russia using renewed interest in the creature to garner attention ahead of the elections?  Vladimir Ryzhkov looks at the possibilities for protesting the elections.  The trial of suspected arms dealer, Viktor Bout, has started in New York.  The Guardian review’s Joseph Brodsky’s Collected Essays.

PHOTO: Russia’s Prime Minister Vladimir Putin (L) and China’s Premier Wen Jiabao walk past a guard of honour during a welcome ceremony at the Great Hall of the People in Beijing October 11, 2011. REUTERS/Jason Lee