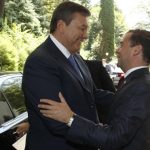 President Dmitry Medvedev met his Ukrainian counterpart, Viktor Yanukovych, yesterday, but no concrete outcomes on gas price have been announced, as the latter urges that the dispute should stay out of court.  Yanukovych also said that he ‘can not and will not’ interfere in the trial of Yulia Tymoshenko (click here for Washington Post analysis).  The recent Valentina Matviyenko scandal is a pre-election display of state manipulation displaying all the key features of Russia’s sham democracy, says Michael Bohm, as RFE/RL speculates as to whether current Deputy Prime Minister Dmitry Kozak (‘Mr. Fix-It’) will take her place as Governor of St. Petersburg.  Medvedev has given his backing to a U.N. Security Council resolution authorizing military action in Libya, as Hillary Clinton calls on Russia to stop selling arms to the Syrian government.

Mikhail Prokhorov is attempting to boost the campaign for his Right Cause Party by pledging visa-free travel to Europe, and said that Russia needed to ‘get back to the plan to create a big Europe’ by joining the Euro, adding that such a move might ‘rescue European countries from bankruptcy’.  He also suggested that he ‘could handle’ the role of Prime Minister, prompting an amused response on Twitter from Dmitry Rogozhin: ‘Prokhorov is ready for the prime ministry. It’s just that the prime ministry is not ready for him.’  The Central Elections Commission has expressed caution over how many foreign observers it will allow to monitor the December elections, suggesting that most of the work could be ‘done from a distance’, and promising that ballot stations would be staffed with football fans.

The officials accused and then acquitted of poaching endangered sheep after a helicopter crash in the Altai region will face a retrial.  Debt marshals will apparently be hunting for cars that they can repossess at the MAKS air show next week.  More on Vladimir Putin’s ancient-treasure-troving scuba dive.  Soldier Nicolai Lilin’s written account of his time in the Russian army blurs fact and fiction, says The Independent.