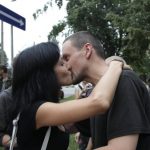 A reported 30 activists were arrested in Moscow for partaking in a ‘Day of Wrath’ action, organised by the Left Front, usually held monthly but in this case particularly focused on the plight of Sergei Udaltsov, who was sentenced to 15 days in jail for taking part in a Strategy 31 rally last month.  The Other Russia reports on claims of police brutality during and following the arrests, whilst RIA Novosti says that those detained have since been released.  Boris Nemtsov was also reportedly arrested – and charged – for handing out flyers that read ‘Vote against everybody’.  The Investigative Committee has filed charges against two prison doctors for their role in the death of lawyer Sergei Magnitsky, as the lawyer’s supporters argue that the arrest of such minor officials amounts to scapegoating.  A separate investigation has been launched into the lack of proper treatment at a prison hospital in St. Petersburg where inmates with HIV, hepatitis and tuberculosis are reportedly dying from lack of care.  Victor Davidoff looks at some of the contradictions littering the draft election platform of the All-Russia People’s Front.

Vladimir Putin attended the opening of a new dam in St. Petersburg – the Moscow Times calls it ‘a showcase achievement’ for him.  Mayor Sergei Sobyanin’s facelift of Moscow is the source of much speculation as the city’s sidewalks are ripped up – Sobyanin defends himself against accusations that his wife’s business is profiting from the work.  Harmony Center, the Latvian party that represents Russian interests, may rejoin Latvia’s government for the first time since it gained independence from the Soviet Union.  The World Wildlife Fund is hoping that a government working group will recommend that logging in the Bikin River Valley be halted later this month.

Nina Khrushcheva writes on the history of the Berlin Wall.  The Moscow Times profiles Yekaterinburg.  Dmitry Medvedev lost his tie at talks for the Collective Security Treaty Organization.  The FT reviews Dmitri Trenin’s book on Moscow’s need for modernisation.