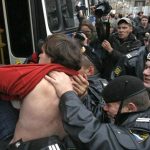 The death of school principal Andrei Kudoyarov in pretrial detention is reminiscent of the death of Sergei Magnitsky, notes this piece, as news breaks of a second detention death this week and an investigation into Kudoyarov’s death is launched.  William Browder has been speaking to RFE/RL about the ongoing search for justice for Magnitsky (click for video).  A group of protesters rallied in Irkutsk yesterday to protest a deforestation project near Lake Baikal. Following what he calls a politically motivated conviction for fraud, former United Russia member Maksim Dudarev is alleging that authorities orchestrated a fraudulent Yukos auction in 2004.  Mikhail Prokhorov says he plans to return to politics when the conditions are right.

Prime Minister and judo enthusiast Vladimir Putin is eagerly anticipating his return to the presidency, saying that his decision is ‘absolutely right’ and ‘will strengthen the system of government in Russia’.  Nikolai Petrov calls out Putin’s ‘superficial’ and ‘bombastic’ speech at the VTB conference last week.  Is there a message for the Prime Minister in the Occupy Wall St movement?  Vladimir Putin’s China visit has led to promises of greater cooperation on the world stage.  The Organization for Security and Cooperation has agreed to reduce the number of monitors that it will send to the December elections by 60, leaving a delegation of 200.

A rights watchdog is calling on Hollywood entertainers to return gifts and cash lavished on them by Chechen leader Ramzan Kadyrov.  Moscow’s traffic problems could stand in the way of a successful World Cup bid.  The Guardian breaks down this week’s yeti craze.