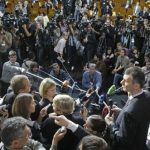 Mikhail Prokhorov has stepped down from the Right Cause party, accusing the Kremlin of using ‘minions’ to control party activity.  In particular, Prokhorov called for the ouster of Vladislav Surkov, calling him a ‘puppet master […] who has privatized the whole political system’.  It appears that Prokhorov was voted out of the party at the same time as he volunteered his own resignation, with both outcomes resulting from his refusal to toe the Kremlin line.  Cynics still believe that Prokhorov is working for the Kremlin, with the BBC reporting rumours of a ‘secret plan’ to boost Prokhorov’s independent image.  ‘I do not plan to quit politics,’ he said.  The Communists have acted on the initiative of corruption whistleblower Alexei Navalny, who last week challenged a Duma party to introduce his draft bill to limit the purchase of expensive cars by state officials.

Two analysts discuss the key issues pertaining to British Prime Minister David Cameron’s recent visit to Russia.  A retired pilot has spoken out against the Federal Transport Agency’s move to limit the number of airlines in operation, saying that aviation safety is cultural, not technological.  Russia has lost its Rugby World Cup debut to the U.S. team.