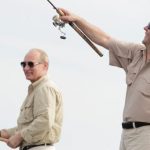 Sergei Mironov is denying various stories that have cropped up about the desired political alliances of A Just Russia this week, prompting speculation that the party has become the object of a smear campaign headed by Kremlin deputy chief of staff Vladislav Surkov.  Authorities in St. Petersburg seized the latest edition of the party’s newspaper earlier this week on suspicion that it contains ‘extremist content’ (the paper had urged voters not to support Valentina Matviyenko in this Sunday’s district elections).  Boris Nemtsov has been arrested twice this week for protesting against Matviyenko, says the Other Russia, which also documents an account of opposition protesters being attacked by Nashi members – allegedly with the help of the police.  Despite Russia’s reputation for stage-managing its elections, ‘Kremlin insiders see popularity as a key to the survival of a government that […] has few stable state institutions other than its leaders’ personalities’’, says Ellen Barry.  Vladimir Putin and Dmitry Medvedev have been out fishing on the Volga river together.  Whatever the outcome of next year’s presidential elections, says Brian Whitmore, ‘this is Putin’s show’.

The Deputy Foreign Minister insists that co-operation on Iran and Afghanistan with the United States will not be affected by visa restrictions on officials linked to the case of Sergei Magnitsky.  Two transport officials have been detained over the sinking of the Bulgaria pleasure boat last month.  Preparations are being made for next month’s international political forum in Yaroslavl, whose theme will be ‘the modern state in an era of social diversity’.  The Interior Ministry’s new YouTube channel (themvdtube), launched with the aim of raising awareness about fraud, is ‘awash with criticism’ from site users.

Ekho Moskvy’s loyal following has its roots in the Soviet Union, says the Washington Post.  Was Stalin responsible for the Soviet collapse?  ‘The end of the Soviet empire inspired dreams of a better life,’ which, for many, has yet to materialise, says Reuters.  Mikhail Gorbachev wonders whether he was ‘too liberal and democratic as regards [Boris] Yeltsin.  I should have sent him as ambassador to Great Britain’.