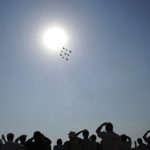 Mikhail Gorbachev held a press conference in Moscow yesterday to mark tomorrow’s 20th anniversary of the Communist coup attempt against him, during which he praised Mikhail Prokhorov, criticised Vladimir Putin for restricting political freedoms, and called for fresh leadership.  The Moscow Times remembers this coup, and the erection of the Berlin Wall, whose 50th anniversary also falls this week.  The WSJ notes that Dmitry Komar, Ilya Krichevsky and Vladimir Usov are – the three men who died during the coup – have been all but forgotten.  Mary Dejevsky recalls ‘the hour when Soviet Communism really fell’; Reuters has a further witness piece, and the BBC has a video report, which includes interviews with engineers and pet groomers.

Venezuela’s gold industry, which is currently mined by only one Russian-owned company, is to be nationalized – reportedly part of Hugo Chavez’s plan to shift cash reserves ‘out of Western nations to political allies including China, Russia and Brazil.’  Chavez says that he plans to keep foreign currency reserves in allied banks, including Russia, called for ‘a round of applause for Russia’ for its arms supplies, and hinted that Venezuela expects to receive a second $4 billion loan from Russia to help it modernise.  A report sponsored by the Kremlin says that Russia’s social policy fosters a culture of poverty, and that the centralisation of power is hampering industry development.  The head of the space agency says that manned spaceflights are no longer a top priority.

Svetlana Medvedeva, the wife of the President, is to hold a rally of blondes in Sochi next month.  Viktor Bout’s lawyer insists that his client has never had any involvement in weapons sales.