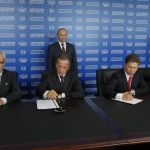 Newspaper owner Alexander Lebedev showed a glimpse of his former occupation as a KGB spy this weekend when he struck fellow tycoon Sergei Polonsky during a pre-recorded television debate.  ‘I’m not a fan of such behaviour, but sometimes if you are threatened verbally and physically you have to neutralise the threat‘ was the oligarch’s reasoning.  See the video, which has become a viral hit, here.  Exiled billionaire Boris Berezovsky apparently faces accusations of ordering the murder of journalist Anna Politkovskaya, in what the tycoon’s lawyer views as another attempt to force his extradition from the UK.  If Putin were to stay in power, ‘[t]he hopes for internal reform of the current system of power would disappear‘, and the brain drain would accelerate, says imprisoned ex-oligarch Mikhail Khodorkovsky.  As comparisons emerge between the Yukos founder and Kremlin-irking billionaire Mikhail Prokhorov,  this op-ed point outs that the latter fell from grace when he ‘forgot that the chairman of Russia Inc. is Prime Minister Vladimir Putin and his trusted CEO is Vladislav Surkov’.  Following his departure from the Right Cause party, the owner of the New Jersey Nets has been seen to soften his stance on the Kremlin, stating, ‘there was no personal conflict with anyone. […]  In the end it was a conflict of ideologies’.  He apparently harbours no fears of suffering the same fate as Khodorkovsky.  Ex-Moscow Mayor Yuri Luzhkov has offered scathing criticism of Russia’s political parties in the Moscow Times, with the exception of Yabloko.  The Washington Post examines opposition opinion on Medvedev.  ‘[A] tiny bird with beautiful wings who buzzes loudly, is extraordinarily greedy, and most importantly, is capable of flying backwards’, is Garry Kasparov’s verdict on the President.In a surprise result, Latvia’s pro-Russia party, Harmony Center, has gained the most votes in a snap parliamentary election, with more than 28%.  Meanwhile the second and third place parties have begun talks on forming a coalition in an attempt to keep the Kremlin-friendly party out.  ‘Someone has demolished our memories’: the destruction of Moscow’s central mosque has raised debate about the city’s bulldozing attitude towards architectural heritage.  ‘It’s strange that the mosque was torn down on September 11,’ says the first deputy director of the Central Directorate of Muslims, via Bloomberg’s Jeffrey Taylor.  Time’s Simon Shuster examines how a canny Vladimir Putin managed to capitalise on 9/11  in order to propel Russia’s campaign to crush the Chechen insurgency.  As ethnic tensions loom large in political debate, this article considers the influx of central Asians to Russia’s capital and the prejudices they face.

A Pennsylvania couple have been charged with involuntary manslaughter, child endangerment and conspiracy, but acquitted of murder charges over the death of their adopted Russian son.