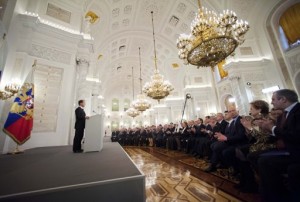 The Kremlin’s human rights council has called for an overturning of the most recent verdicts against former Yukos CEO Mikhail Khodorkovsky and his business partner Platon Lebedev, and says that the two were jailed illegally following their second trial.  Few of the 2,000 election violations currently under investigation involve vote-rigging, say Kremlin investigators.  Could transparent ballot boxes be the answer for next year?  The first session of the new State Duma was ‘one of its most quarrelsome in years’, with opposition MPs refusing to support the speaker candidate put forward by United Russia.  The Moscow Times is liveblogging ‘lame duck’ President Dmitry Medvedev’s annual state of the union address.  Thus far, the president has called for political reform and a crackdown on corruption, and for curbs on contracts involving companies with ties to government.

Two senior Moscow tax officials have been arrested on suspicion of misappropriating over $630,000.  An official investigation has been opened into accusations that Boris Nemtsov’s phone was tapped by the Kremlin.  Reuters reports on HIV in Russia, in particular the country’s rejection of Western measures to contain the disease. How did United Russia manage to score nearly 100% of the recent vote in Chechnya, given Putin’s record of destruction in the region, asks this report.  ‘United Russia is the party of Putin, and Chechnya would never vote for Putin.’

The CIS Collective Security Treaty Organization (CSTO) is working towards an agreement under which all seven member states would have to agree if any individual state were to allow foreign military bases on its territory.  The Washington Post has compiled a gallery of Russia’s scientific landmarks.